Every autumn, giant crowds—last year it was 886,037 people—head to New Mexico for the world’s largest hot-air balloon festival. The nine-day Albuquerque International Balloon Fiesta, which runs from October 5 through October 13 this year, is a sight to behold, with brightly colored balloons dotting the skies at daybreak. More than 650 talented balloon pilots perform airborne tricks.

Albuquerque’s weather makes it ideal for hot-air ballooning: Pilots have good control over where they land and fly, while Sandia Peak rises picturesquely in the background. 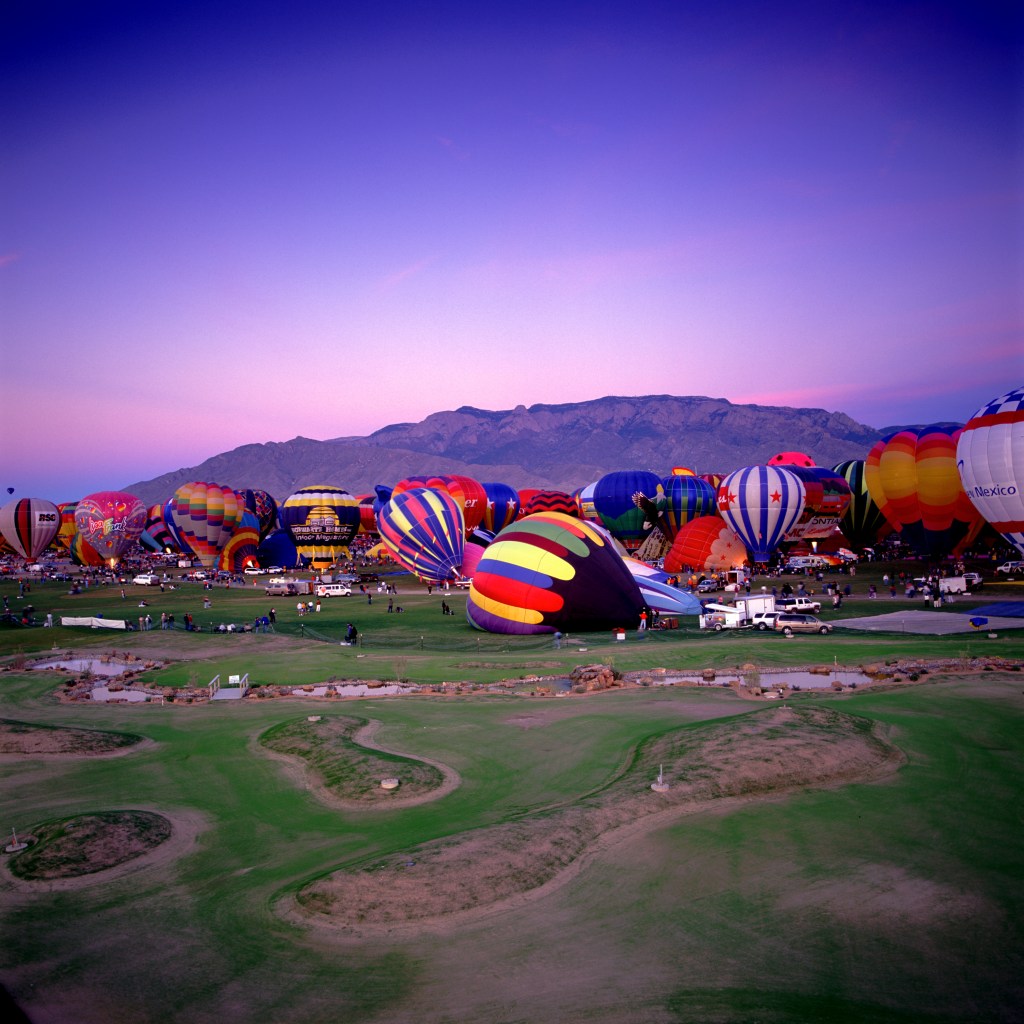 Daybreak, before the balloons take off.

But if you don’t want to experience the airborne sights standing nose-to-elbow with thousands of other people in Balloon Fiesta Park, Corey Spoores has an alternative. With his business partner Michael Carney, he takes groups of no more than 10 people (along with two guides) out on the Rio Grande River to watch the balloons from the vantage point of a stand-up paddleboard (SUP). Their company, MST Adventures, offers the four-hour, $85 tour every day of the Fiesta, weather permitting. The active group starts before daybreak so paddlers can see wildlife on the river—including roadrunners, beaver, migrating sandhill cranes, and more—before the day’s crowds arrive.

As they are getting on the water, listening to how-tos and safety instructions, paddlers catch Dawn Patrol, a small group of hot-air balloons that launch while it is still dark. Other pilots watch them, learning about the day’s wind direction and speed in real time. “As they rise over the trees the whole balloon will glow as the pilots add heat, and we can see that in the distance,” Spoores says. 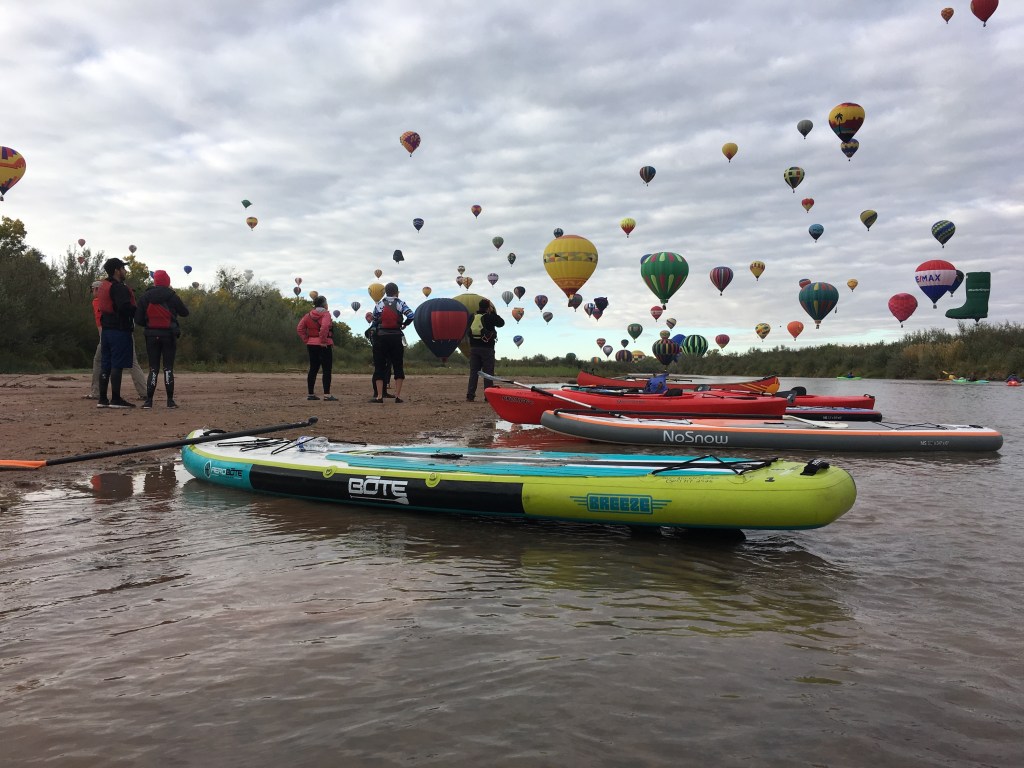 The MST tour starts before daybreak so paddlers can see wildlife on the river—roadrunners, beaver, deer, and more—before the day’s traffic sets in.

Then the tour winds its way down the river. As the sun rises, paddlers get comfortable gliding on the water, propelling themselves stroke by stroke. Guides carry snacks and safety gear and have drybags for shedding layers of clothes as the day warms up. Around 7 a.m. the Mass Ascension begins; that’s when the abundance of balloons—not just the classic rounded shapes, but also cowboy boots, chickens, and a cow with udders—appears.

The balloons float above the cottonwood trees, downstream of the paddlers, the colorful flock filling the sky. Typical air temperature may be around 55 degrees Fahrenheit before dawn, and the river water closer to 63 degrees, so mist comes off the water. The temperature differences also create a cold-air bubble that is helpful to pilots in navigating and changing speed. 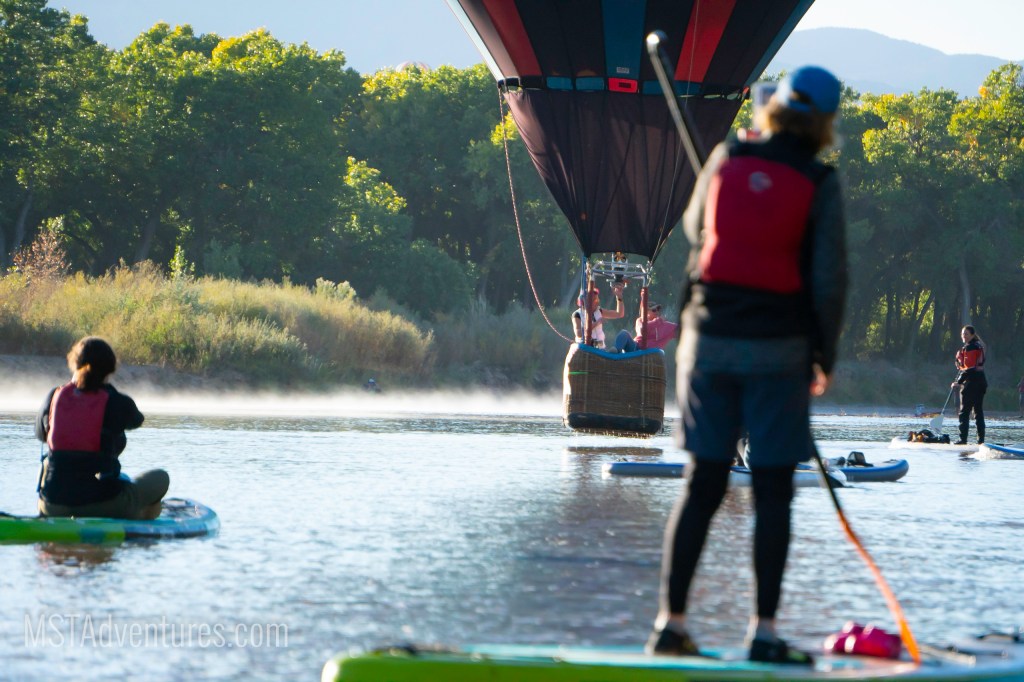 Witnessing “splash and dash” in action.

“The goal is to see the pilots drag the basket on the water,” Spoores says, describing a practice called “splash and dash.” The hot-air balloon basket skims the surface of the river, so paddlers are close to the action (though most likely sitting or kneeling on their boards to watch at this point), before they head back up to the sky.

“The really good pilots have this skill dialed in, and it is not uncommon to see them run the tops of the willows,” he adds. It might even be possible to high-five a pilot from the water.

Paddlers cover about seven miles of the Rio Grande over four hours, with stops for snacks, balloon-watching, and photos. Spoores and Carney are experienced watermen (MST stands for mountains, streams, and trails, and the duo play on all three), plus Carney is a photographer, so the memories are preserved for posterity and social media. 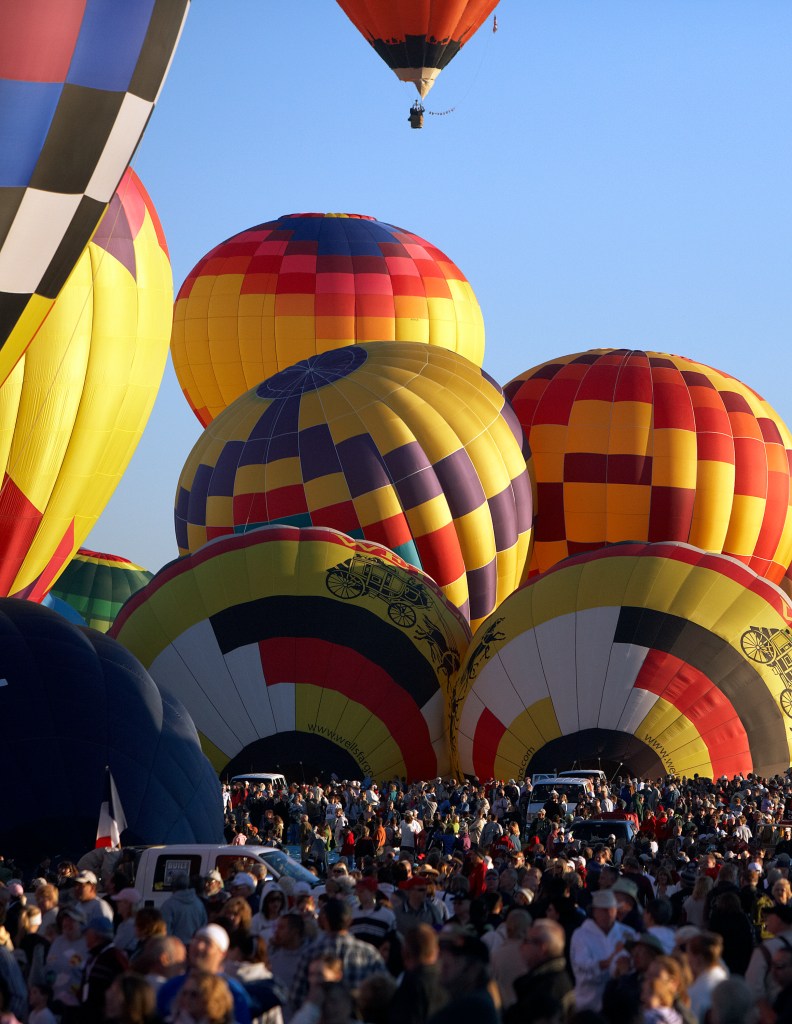 Crowds flock to Albuquerque each October for the world’s largest hot-air balloon festival.

A Champagne toast is a tradition in hot-air ballooning. It started in the 1700s as a peace offering: When pilots would land in a random private field in France, the bottle of bubbly was considered an apology to the landowners.

Paddlers on the MST Fiesta tours get to partake. Guides bring a New Mexico–made mimosa drink for sipping on a SUP—it is not enough to impair their ability to safely paddle, but a toast to be part of the process. Says Spoores: “It is one of the ways we tie the tradition to the tours.”