The appointment of Charlie Scharf as chief executive of Wells Fargo is not just a crucial turning point for the troubled San Francisco bank. It also represents further consolidation of the most powerful professional network in global finance: the JPMorgan Chase executive diaspora.

Former JPMorgan executives now lead banks with assets totalling some $4.7tn. Add in JPMorgan itself, where Jamie Dimon is into his 14th year as chief executive, and the sum reaches $7.4tn.

In the UK, Barclays is run by Jes Staley, who previously ran both JPMorgan’s asset management and investment banking divisions, and Standard Chartered is led by Bill Winters, who also did a stint leading the JPMorgan investment bank. In the US, in addition to Wells, PNC Financial, the eighth-largest bank in the country, is run by Bill Demchak, who ran JPMorgan’s structured finance and credit businesses.

Mr Scharf’s JPMorgan career culminated with his leadership of the retail banking division from 2004 to 2012, before he become chief executive of Visa and then BNY Mellon.

The Dimon network does not stop at the banking industry. Frank Bisignano, former JPMorgan chief operating officer, is the chief executive of First Data, the payments company that was sold to rival Fiserv for $22bn in January. Matt Zames, another former chief operating officer, is president of the private equity company Cerberus. Ryan McInerney, now president of Visa, once ran consumer banking at JPMorgan.

Investors and analysts give much of the credit to Mr Dimon’s own management skills. “The skills he teaches, the qualities he looks for, if I was [Wells’ chair] Betsy Duke or head of another search committee, I would look right to JPMorgan,” said Tom Brown, a longtime bank investor and commentator. “The highest praise I can give someone is that they make complicated issues simple, and Jamie and Charlie [Scharf] are so much alike in that way.”

Whenever we have a hero, we develop cultures around that — look at Silicon Valley and Steve Jobs, and everyone walking around in black turtlenecks

Certainly, the credentials of any JPMorgan alum are burnished by the outstanding performance of JPMorgan shares, which have almost tripled over the past 10 years, far outpacing all other big US banks. The bank did not go through the near-death experiences that convulsed so many rivals during the financial crisis.

“JPMorgan being JPMorgan definitely helps,” said Jeffrey Harte, an analyst Sandler O’Neill. “Managers could focus on running their businesses during the crisis when others were in survival mode.” He cites strategic consistency and an emphasis on accountability in both good times and bad as hallmarks of the Dimon regime.

Several industry insiders note that JPMorgan’s outsize influence is not without precedent, pointing out how executives at Citigroup in the 1980s and 1990 went on to play important roles at other institutions. One of these was Mr Dimon himself. The list also includes Richard Kovacevich, who went on to lead Wells Fargo. 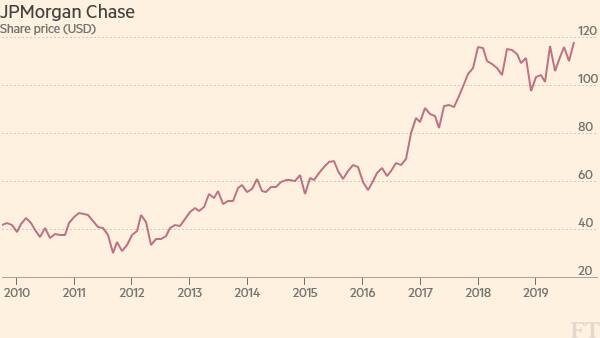 Not everyone thinks that the enthusiasm for executives who have worked under Mr Dimon is entirely benign. “Whenever we have a hero, we develop cultures around that — look at Silicon Valley and Steve Jobs, and everyone walking around in black turtlenecks. There is definitely too much emphasis on the persona and not enough on the leadership behaviour,” said Lindred Greer, faculty director at the Sanger Leadership Center at the University of Michigan.

Dave Ellison, who runs a portfolio of financial stocks at Hennessy Funds, thinks that the world of banking has become too cosy. “These boards of directors is a moneyed club — they all know each other . . . I was hoping Wells Fargo would take a chance on someone new, someone out of the box who would shake things up.”

The world of very low rates and increasing technological competition requires that banks think in new ways, Mr Ellison said. “But here is another case where they are bringing in someone else who is in the club, rather than taking a chance on someone new.”