A report about to be published shows the restaurant industry is thriving and a contributing factor is the use of investment crowdfunding.

Crowdfund Capital Advisors will publish the report and gave me a sneak peak at some of the data and conclusions prepared by analyst Ryan Hellpap under the direction of Sherwood Neiss, principal. 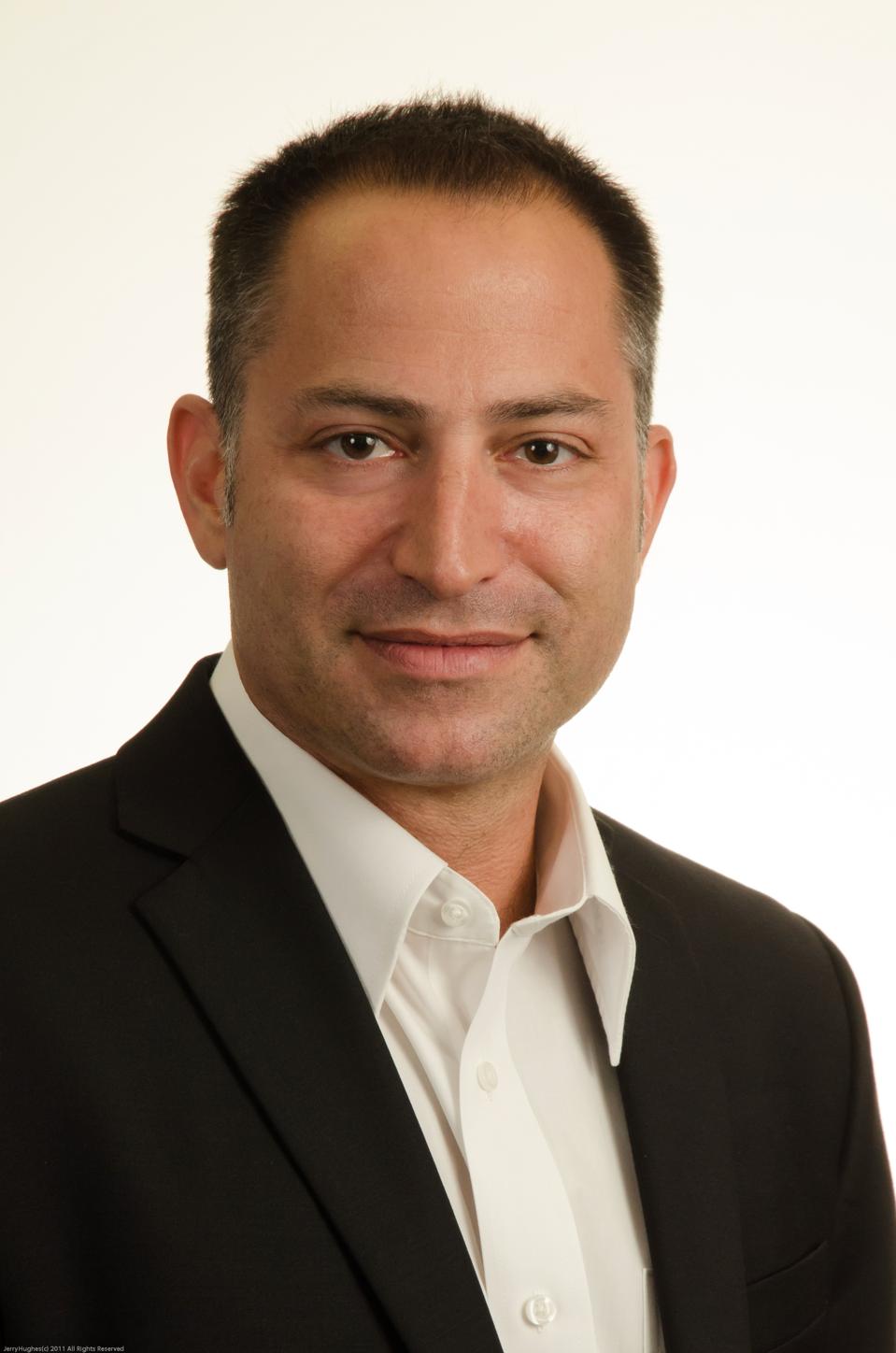 Authorized by the 2012 JOBS Act, Regulation Crowdfunding was implemented by the Securities and Exchange Commission in May of 2016, effectively allowing ordinary investors to make investments in private companies for the first time since the Great Depression.

Restaurants have proven to be a good fit for investment crowdfunding. The report says, “In the first year of Reg CF, 22 early restaurant adopters jumped into the funding space. This number doubled to 45 by the third year. A 205% growth in just 2 years. This year the industry is on target to fund 84 restaurants. With an inflection point coming, we believe 400 restaurants per year will seek funding by 2024.” 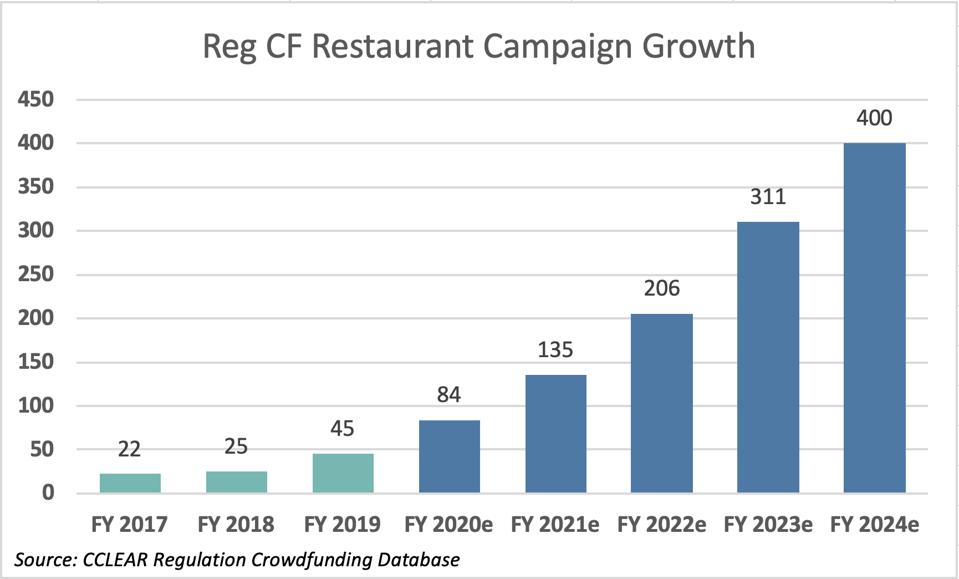 The report notes that restaurants are the third most popular industry for investors measured in terms of dollars invested. “They raise on average $240,000 in 90 days funding over 60% of the median start up financing needed by restaurants. Restaurants within the Reg CF industry also raise 4.2% more than the average for all companies raising funds under Reg CF.”

“By 2024, we believe over $170M cumulatively will have been invested into restaurants raising money online,” the report projects. 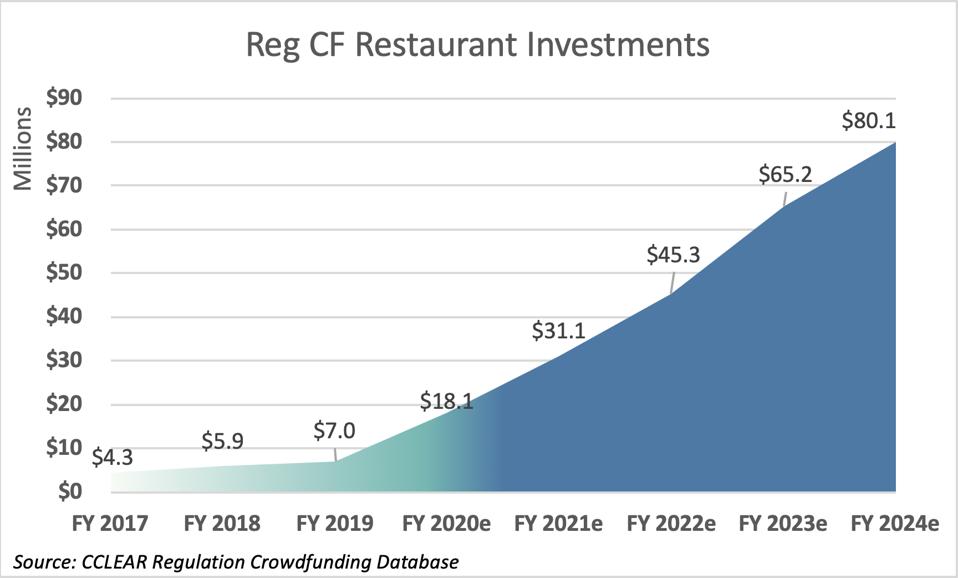 While these numbers pale in comparison to the nearly $100 billion of venture capital invested in all industries in 2018, they are disparate markets. Venture capitalists invest in scalable restaurant concepts while crowdfund investors are more likely to invest in a local eatery where they know the chef as well as they know the food.

There is another dramatic difference between venture capital and crowdfunding: funding success. “Compared to Venture Capital where less than 6.5% of firms successfully raise funds, the success rate for restaurants in Reg CF hovers around an impressive 76.58%,” the report says.

Restauranteurs like crowdfunding because their investors become marketers. Over 18,000 people have invested in restaurants via crowdfunding, an average of 214 investors per restaurant. “Interviews with restaurant owners cite ‘the marketing power of the Reg CF investor fan base,’ ‘PR that money can’t buy’ and ‘increased revenues,’” according to the report.

Interestingly, restaurant issuers are typically rejecting equity as a funding model, opting for debt structures either tied to revenue or simply scheduled. As compared with equity investments that may not pay off for years, debt structures provide for a return on cash in the short run. Yields are in the range of 5 to 16%.

The funding seems to be working for both investors and restauranteurs. The issuers are required to file annual reports with the Securities and Exchange Commission after receiving Reg CF funding. These reports show that 2016 issuers have quadrupled revenue since issuance.

Restaurant issuers can use any SEC registered platform for fundraising but two, NextSeed and WeFunder, have hosted the most restaurant campaigns at 43 and 22, respectively.

A final striking fact illuminated by the report is that two-thirds of the restaurant issuers were new concepts. Only one-third were existing. This is encouraging for startup entrepreneurs.