Tens of thousands of people thronged Hong Kong’s streets on Saturday to mark the fifth anniversary of the pro-democracy “umbrella movement” in protests that quickly turned violent, as pressure builds in the territory ahead of the 70th anniversary of the founding of the People’s Republic of China on Tuesday.

An evening that began with a peaceful rally descended into chaos, with police usingwater cannon and pepper spray to disperse crowds who hurled bricks at the windows of Hong Kong’s government offices and launched at least one Molotov cocktail.

Demonstrators gathered in Admiralty, the neighbourhood that saw the first skirmishes of the 2014 umbrella movement, which failed in its objective to bring about democratic reform. At a government-sanctioned rally in Tamar Park, veterans from that movement addressed a peaceful crowd.

“We’re here tonight because we regret not standing up earlier and because we want the world to know we won’t give up on Hong Kong, our home,” said Andy, 25, an accountant.

“Five years ago I was in university but didn’t participate in [the umbrella movement]. Politics felt very distant from me. But now I’m in the workforce I realise politics is connected to everything . . . in Hong Kong, the political system is rigged against us, it is controlled by Beijing.”

In the early evening, black-clad demonstrators clashed with police. They smashed many of the ground floor windows of the government building with bricks, while dodging intermittent jets of pepper spray launched by police from inside the perimeter fence. Police also fired blue-dyed water from a water cannon.

The streets around the government offices were strewn with banners bearing slogans. One slung from a bridge carried a taunting message to lawmakers. It simply said; “We are back”, recalling the 2014 movement which lasted for 79 days before authorities sentenced to jail the movement’s leaders.

This years protests have been far larger than those of the umbrella movement and have persisted now for more than three months. Saturday’s turnout was relatively modest, with organisers putting it at between 200,000 and 300,000.

But many demonstrators said that momentum was building toward a much larger planned protest on October 1, the 70th anniversary of the founding of China’s Communist Party.

Beijing is planning to mark the 70th anniversary with its biggest ever military parade to show both its citizens and the world that Chinese power is not to be trifled with.

In this context, aspects of the Hong Kong protests are all the more incendiary. In one example on Saturday, images of Xi Jinping, China’s president, were glued to the walkways in Admiralty, ready for demonstrators to wipe their feet on his face as they passed.

China has desisted so far from overt military intervention in Hong Kong. Nevertheless, some protesters had a sense of foreboding.

“Hong Kong and mainland China are like two parallel worlds, so different,” said Geoff Wong, a social worker, at the Admiralty protest. “But China cannot allow this to continue and they are already increasing their control over Hong Kong.” 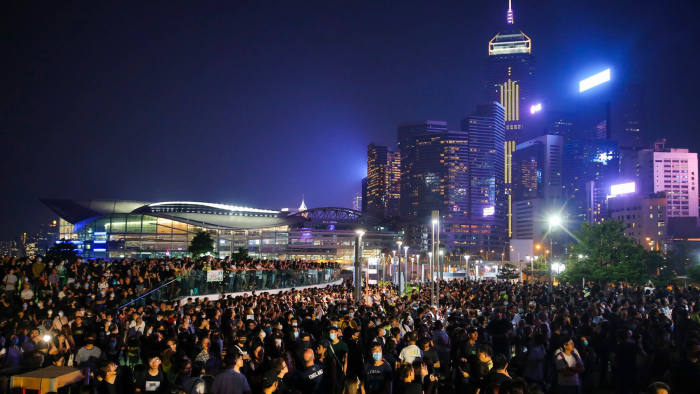 A fireworks display organised for the 70th anniversary has already been cancelled, with the Hong Kong government citing public safety concerns.

Now in their 17th consecutive week, the protests have escalated from a single-issue campaign about an extradition law into a broad pro-democracy movement, and the greatest challenge to the “one country, two systems” policy that has granted Hong Kong limited autonomy from mainland China for the last 22 years.

Demonstrations began in opposition to a proposed extradition bill, which would have enabled fugitives to be sent to mainland China to face trial. Carrie Lam, Hong Kong chief executive, suspended the bill after 13 weeks of demonstrations. The move was discounted by protesters as “too little, too late”.

Protesters have since expanded their demands. These include an independent inquiry into police conduct and universal suffrage for the territory. A regular chant at demonstrations is “five demands, not one less”.

Ms Lam held the first of a series of co-ordinated “dialogues” on Thursday in an effort to de-escalate the situation. Following the closed-door question and answer session with 150 participants, Ms Lam was forced to remain in the building for four hours until protesters outside had dispersed.