As guests enter the bar, they’re greeted by a plume of vapor cascading from a repurposed coffee siphon. A clear liquid percolates among rosemary, juniper, cucumber, and citrus as the aromatics fill the air. “We’re distilling gin,” the suit-and-tie barkeep explains with delight. Within minutes, the spirit is extracted and poured over ice for the evening’s second course: a gin and tonic.

The Bazaar by José Andrés at SLS Beverly Hills recently introduced Bazaar Flight at Gate: Bar Centro, a 10-seat, 12-course cocktail tasting. The boozy journey, led by bartenders akin to mad scientists, reimagines global classics, where one minute you’re sipping a drink and the next you’re eating one.

“We were looking to challenge our skills and the general perception of what constitutes a cocktail,” says Ricardo Gomez, general manager at The Bazaar. “Then as the flight theme began to develop, it was a natural evolution to look to geography—drinking customs and traditions, ingredients, local spirits—to create a holistic experience from start to finish.” 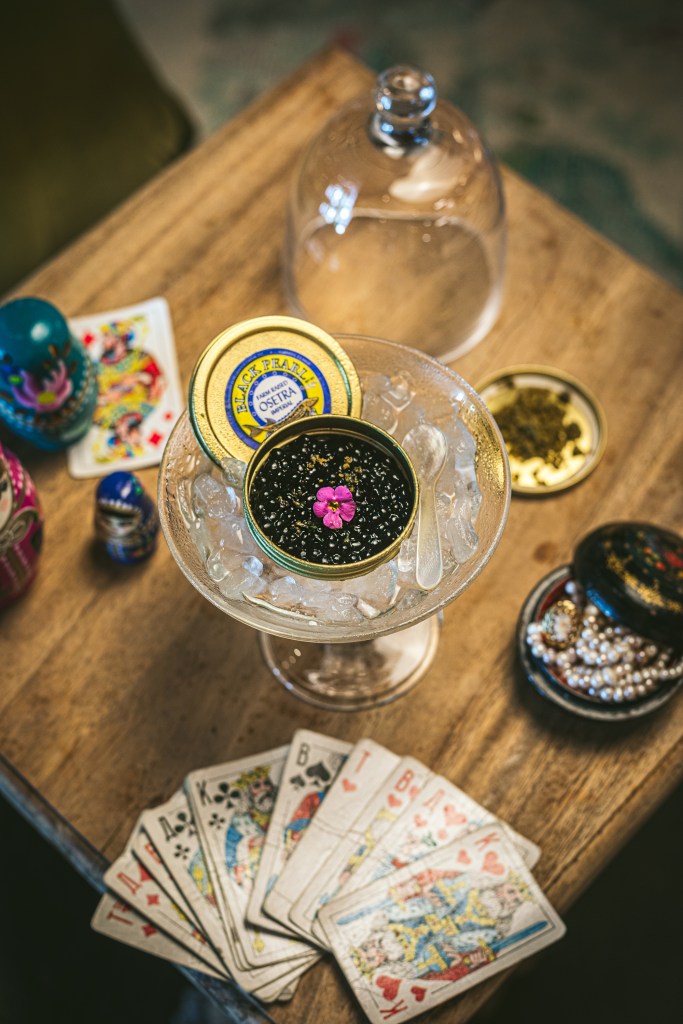 A dirty martini—with more than just a twist.

The sensibility of the program reflects the whimsical food emporium of The Bazaar, where a carnival of dishes has tickled palates and imaginations for more than a decade. “José’s principles apply as much in the kitchen as they do behind the bar. We never add anything ‘just for show,’ ” Gomez explains. “But at the same time, everything is a show; it’s a very visual experience that is meant to stimulate all five senses. It’s meant to take something very sophisticated and technical and turn it into a playful wonderland where the guest understands that there is a lot of science behind each cocktail, but they still choose to describe it as magical.”

The voyage at Gate: Bar Centro begins upon making a reservation, when guests receive an electronic boarding pass detailing their passenger name, flight, and seat number. Once there, the flight officially takes off with mysterious flavors and textures and a constant rumble of “Where will we go to next?”

Guests are invited to ask questions and to add personal anecdotes, travel stories, and more as they drink their way across the world. “And when it’s all over, we want to make sure they leave with a sense of wonder and magic that is inherent to every Bazaar experience,” Gomez says.

In Cuba, a mojito is transformed into the Cubita: an edible sphere presented on a spoon resting in a cigar box that, once opened, permeates the air with a slightly woodsy aroma. The gelatinous concoction delicately dissolves in the mouth with an exhilarating rush of rum, lime, and mint. 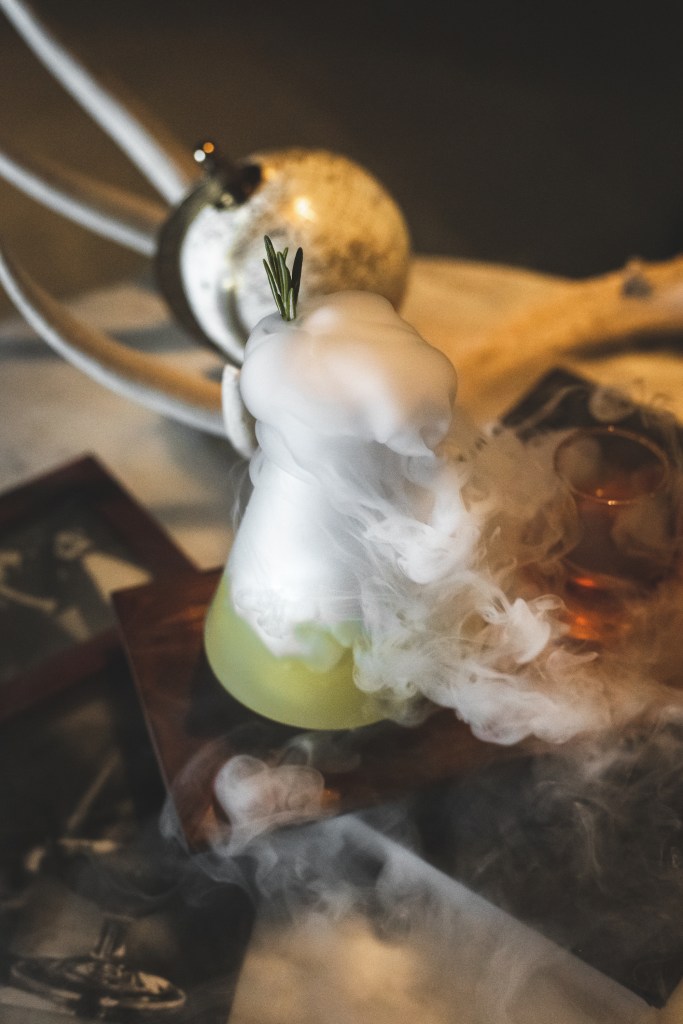 The Spirit Libre, an interpretation of Peru’s beloved pisco sour, tingles the tongue with the effervescence of pisco and Blanche Armagnac and is topped with vanilla-lime whipped cream. Served in a hollowed-out eggshell, it’s best to sip delicately, although anticipation takes over, and suddenly it’s gone in one gulp.

Russia offers an enduring thrill: the dirty martini. But rather than enjoying it from a coupe, it pairs bone-chilling Stoli Elite vodka with salty caviar-esque pearls formed from droplets of kalamata olive juice. 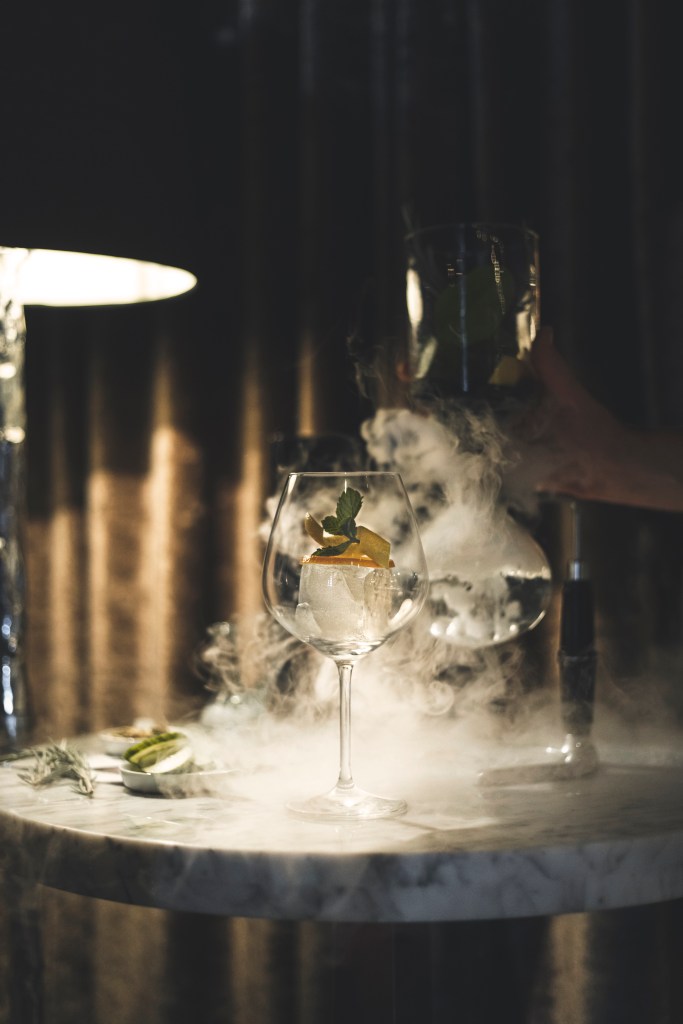 The Gate: Bar Centro experience takes guests on a worldwide tour through reinterpretations of classic drinks.

The tasting tour goes on and on with never-ending intrigue. And while 12 courses may seem like an overwhelming undertaking for any imbiber, the Bazaar Flight provides small bites and is thoughtfully paced and portioned to evade jet lag the next day. Tickets are $100 a person, excluding tax and tip, and are reserved via Tock.

Pack your sense of adventure, and fasten your seat belts; Bazaar Flight is a wild ride.

—A new distillery tells the true—and often untold—origin story of Tennessee whiskey
—The celebrity-branded liquor market is oversaturated
—Craft breweries are going hyper-local to source ingredients
—Some of California’s most famous wines came from a science experiment
—White Bordeaux wines are picking up steam. Here’s what you should know

Follow Fortune on Flipboard to stay up-to-date on the latest news and analysis.