When Democrats read the news on the morning of July 25, many could not help feeling deflated. Special counsel Robert Mueller had testified before Congress the previous day and provided no new ammunition beyond his published report on Russian interference in the 2016 election. The president appeared to have emerged unscathed from the Mueller investigation.

At 9.03am that day, Mr Trump, who had crowed on Twitter that the Mueller hearing was a “disaster for Democrats”, held a 30-minute telephone call with his Ukrainian counterpart, Volodymyr Zelensky. The revelations about that call have resulted in him becoming only the fourth US president — after Andrew Johnson, Richard Nixon and Bill Clinton — to face impeachment proceedings. 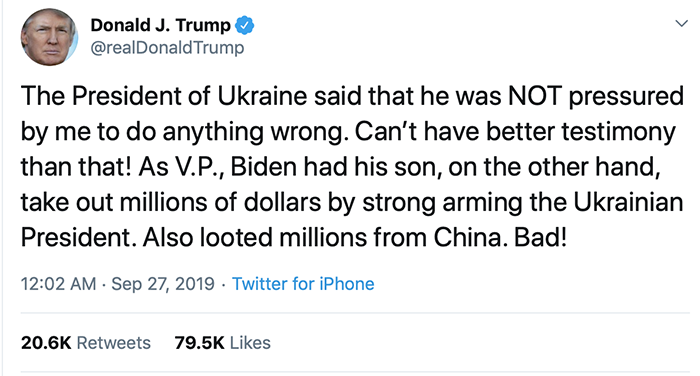 The pace at which the controversy unfolded was astounding. On Monday, just after meeting British prime minister Boris Johnson, US media reported that in the call with Mr Zelensky, the president had threatened to withhold military aid unless Ukraine investigated Joe Biden and his son in an effort to find dirt on the former vice-president and 2020 presidential contender.

The claims came against an even more serious backdrop: an intelligence official had filed a whistleblower complaint alleging that senior White House officials intervened to “lock down” the transcript of the call over concerns that “they had witnessed the president abuse his office for personal gain”.

“There is a kind of Bond villain meets Mr Magoo cartoonishness to the stupidity,” says Julian Epstein, chief Democratic counsel on the House judiciary committee during Mr Clinton’s impeachment. “The day after Mueller testifies and he’s claiming . . . no collusion, he’s doing exactly that.” 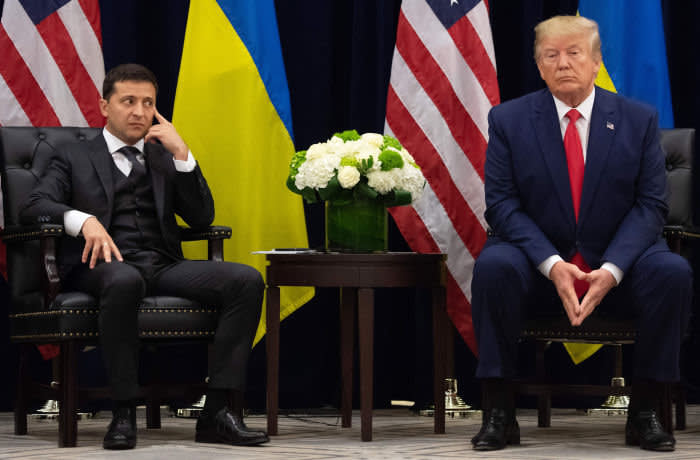 Ukrainian president Volodymyr Zelensky with Donald Trump this week. The US president is accused of threatening to withhold military aid unless Ukraine investigated Joe Biden and his son © AFP

Mr Trump on Monday admitted withholding aid to Ukraine, but denied that this was an attempt to coerce the Ukrainian president to probe Mr Biden. To counter cascading calls for his impeachment, the president vowed to release a transcript of the call. As Democrats pummelled his team for refusing to give Congress the whistleblower complaint, as required by law, he called Nancy Pelosi, the Democratic House Speaker, to ask if they could work something out. “Tell your people to follow the law,” she replied.

In the most consequential decision of her three decades in Congress, Ms Pelosi announced in a televised address on Tuesday that she would open an impeachment inquiry, as she stressed that “no one is above the law”.

“This past week has been incredibly dramatic,” says Brendan Boyle, a Democratic congressman. “Within a week’s time we went from about 120 members for impeachment to now 220 — and rising.” He adds: “People are genuinely shocked and appalled at what Trump has done. This is just on a completely different level.”

When a partial transcript of the call was released on Wednesday, there was no explicit threat over military aid, leading some Republicans to suggest the whole matter had been exaggerated. However, Mr Trump had requested an investigation into Mr Biden and his son’s Ukrainian business dealings.

After the whistleblower complaint emerged on Thursday, Ms Pelosi accused the White House of a “cover up”, capping a dramatic few days that spurred comparisons to Watergate and Nixon’s downfall.

Ms Pelosi has spent much of the past six months fending off pressure from some Democrats to impeach the president and has argued that an inconclusive process could weaken the party in 2020. However, several factors this week appear to have swayed her.

Heidi Heitkamp, a former North Dakota Democratic senator, says the Ukraine scandal is one that average Americans would easily understand. In the call, for example, Mr Trump had asked for “a favour” immediately after Mr Zelensky had said that he was ready to buy US Javelin weapons. 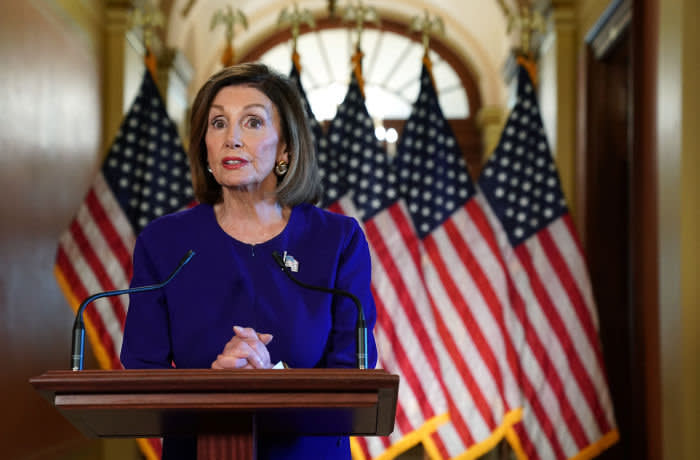 Donald Trump called Nancy Pelosi, the Democratic House Speaker, to ask if they could work something out. ‘Tell your people to follow the law,’ she replied © Getty

The political climate also shifted with the publication on Monday in the Washington Post of an op-ed by seven first term Democrats with national security backgrounds, many of them from congressional districts where the president did well in 2016. “What really moved the whole thing was what we call ‘the majority makers’, the congressional folks who won in Trump districts who all of a sudden said I cannot ignore this any more,” says Ms Heitkamp.

One of the authors was Abigail Spanberger, a former CIA operative whose victory in a heavily Republican district in Virginia in the 2018 midterms was emblematic of the wave that swept the Democrats to a majority in the House.

“We were all horrified by the allegations, which sounded profoundly disturbing,” says Ms Spanberger.

“For those Democratic colleagues who represent districts that Trump won [in 2016], they are taking a bit of a political risk,” says Mr Boyle. “They’re doing it because they genuinely think it’s the right thing to do.”

Ms Spanberger says that while “everyone is telling me that it is [a risk]”, she is not fazed. “I don’t care because I feel so firmly that this is something different.”

As Democrats and Republicans gear up for one of the most bruising battles on Capitol Hill for many years, Mr Trump has lashed out at the “witch hunt” and accused Democrats of trying to protect Mr Biden.

Six Democratically-controlled House committees will soon start investigating the allegations. Ms Pelosi has insisted there would be “no rush to judgment”. 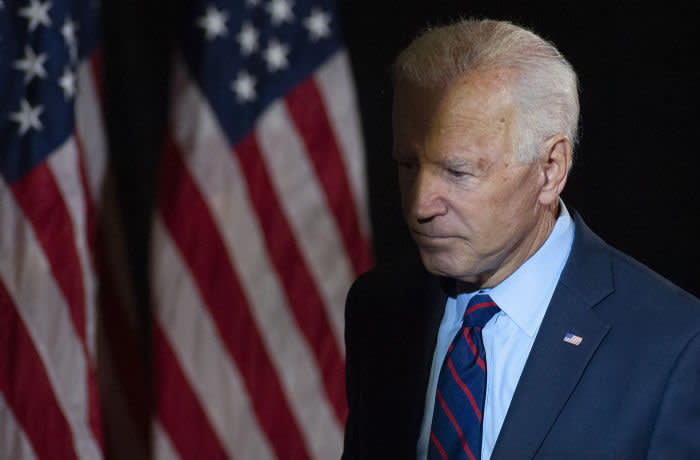 If these committees find evidence of impeachable offences, that will be sent to the House judiciary committee, chaired by Jerrold Nadler, a fierce critic of the president. They could then form the basis of articles of impeachment, which would need a simple majority in the House before going to the Senate where 20 Republicans would have to abandon Mr Trump in order to convict the president.

Timothy Naftali, a presidential historian and former director of the Nixon Library, says the whistleblower complaint was a “remarkable document” that would provide a road map for investigators. “The nature of this abuse of power echoes Nixon’s use of the instruments of the federal government to discredit his enemies,” he says. “But the challenge for Pelosi is to bend over backwards to prove to independents and open-minded Republicans that this will be a fair investigation.”

Mike Rogers, a former Republican head of the House intelligence committee, says the allegations “do not look good for the president” and that his “tacky” response made things worse. “But there is a lot to be substantiated before I would say it is the brass ring for Democrats.”

Democrats have zoomed in on several key areas of the evidence, including the president’s request for “a favour” from Ukraine. According to the published transcript, Mr Trump also said the US had been “very good to Ukraine [but] I wouldn’t say that it’s reciprocal”. 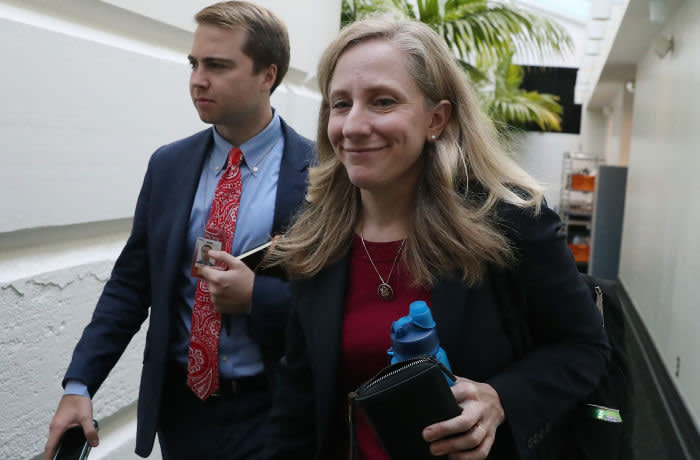 The Democrat Abigail Spanberger, a former CIA operative, said of the latest claims against Donald Trump: ‘We were all horrified by the allegations, which sounded profoundly disturbing’ © Getty

Noah Bookbinder, head of Citizens for Responsibility and Ethics in Washington, says there was a “pretty clear implicit quid pro quo”. “Anybody who has seen The Godfather or Goodfellas understands what it means when someone says we’ve done a lot for you, now I’m asking for a favour.”

Potentially even more damning, the whistleblower said White House officials were so concerned about the call that they took the very unusual step of storing it in a special secure system to prevent it from being widely shared. The whistleblower also revealed that transcripts of other calls had been stored the same way.

Jonathan Turley, a legal expert at George Washington University, says the committees would still have to find clear and incontrovertible evidence against Mr Trump. He said investigators would have “to match a quid to a pro quo”. While the storing of transcripts could suggest a cover-up, he says investigators would first have to establish a crime.

“You really need Colonel Mustard in the dining room with the butcher’s knife,” says Mr Turley. “That means finding someone in the inner circle who is prepared to make this nexus between the military aid and the request for an investigation into the Bidens.”

The whistleblower said roughly 12 people listened to the call, providing a large pool of possible witnesses. The full transcript — which has not been released — could provide more clues.

Mr Trump has responded with defiance. But in recent days, he has lacked his usual vigour. After watching his uncharacteristically short news conference at the UN, Ms Heitkamp said he looked “almost sorrowful”.

So far, Republicans have largely stuck by Mr Trump. Mitt Romney, the Utah senator, said the claims were “deeply troubling”, while Nebraska senator Ben Sasse said they were “very troubling”.

Mr Trump urged journalists to ask for the transcripts of conversations that Mike Pence, his vice-president, had held with the Ukrainian leader. While the comment was interpreted by some as a joke, it could have been a warning to Republicans that abandoning the president would not be the end of the story.

“He did essentially throw Pence under the bus,” says Lara Brown, a political scientist at George Washington University. “He seems to suggest that if he’s going, he wants Pence to go too, which . . . would strike fear in the hearts of Republicans because it means Pelosi would be next in line [as president].”