Mario Draghi made a special plea to the other members of the European Central Bank’s governing council, seated around a ring-shaped table on the 41st floor of its Frankfurt headquarters, as he wrapped up his penultimate meeting as its president.

The 72-year-old Italian urged them not to give off-the-record briefings to the media criticising the ambitious monetary stimulus package they had just decided upon.

“Don’t worry,” Dutch central bank boss Klaas Knot shot back, according to several people present that day, “I will go on the record.”

What followed was one of the fiercest backlashes by council members against any policy rolled out by Mr Draghi in his eight years at the helm of the ECB — only weeks before he is due to hand over to Christine Lagarde.

In the two weeks since the meeting the heads of the German, French, Dutch and Austrian central banks have publicly opposed the ECB’s latest measures, including cutting interest rates to a record low of minus 0.5 per cent and restarting its quantitative easing programme of bond purchases.

This week, Sabine Lautenschläger, Germany’s representative on the ECB’s executive board, became a focal point for the split by quitting two years before her mandate is due to expire. She recently stated her opposition to ECB policy.

Together, the four countries whose central banking bosses have publicly stated their opposition account for more than half of eurozone gross domestic product, raising potential questions over the legitimacy of the ECB’s decision.

This counts for little in the ECB governing council, where members sit as individuals and not as national representatives, and formal votes are rare.

Mr Draghi, who kept a note using black and red pens of the different views on the council that he still keeps close at hand, told the media afterwards that there was enough of a “clear majority” in favour of the decision not to require a vote.

People who took part in the council meeting say as many as 10 out of 25 members expressed reservations on elements of the package and eight of them clearly stated their opposition.

The deep divisions within the top echelons of the ECB raise important questions. Does the split make further monetary easing more difficult? Can Ms Lagarde, who has signalled she supports Mr Draghi’s strategy, heal the divisions? Or will she be forced to change course?

“Draghi is setting a path for Lagarde by clearly laying out the options,” said Danae Kyriakopoulou, chief economist at central banking think-tank OMFIF. “But the political opposition we are starting to see will be something that Lagarde will have to deal with.”

Nowhere is opposition to the ECB’s latest decision stronger than in Germany. Jens Weidmann, head of Germany’s Bundesbank, declared the day after the ECB meeting that it had gone too far and its policies would hurt savers and pensioners.

He raised eyebrows at the ECB by making these comments to Bild Zeitung, the German tabloid, which has been running a campaign against negative interest rates and portrayed the ECB president as “Count Draghila” sucking the money out of savers’ accounts.

Mr Weidmann has opposed the ECB’s bond-buying programme on principle since it started four years ago. He told Bild he would “do what I can to ensure that interest rate increases are not put off for any longer than necessary”.

People familiar with the discussions said Mr Weidmann supported the cut in interest rates. He also expressed reservations about giving banks a partial exemption from negative interest rates on deposits at the central bank via a “tiering” system. This surprised ECB officials, as the tiering policy should help German banks to avoid passing on the costs to depositors. The Bundesbank said he did not oppose tiering.

Divisions at the top: where the council members stand 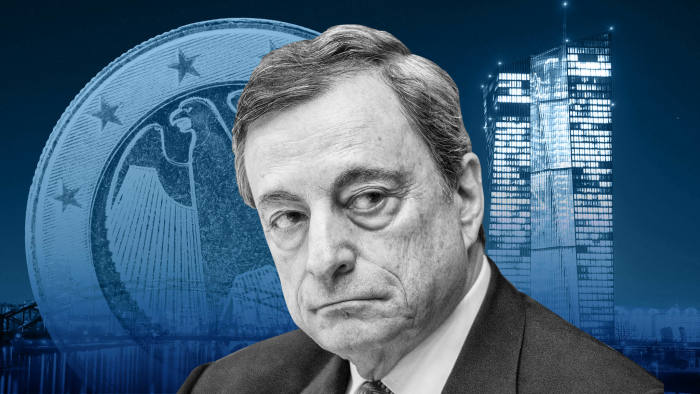 Most other critics of the loosening measures take a less rigid approach, arguing that buying bonds is excessive at this time, given already ultra-low interest rates.

Others who expressed doubts in the meeting were Yves Mersch and Luis de Guindos, both executive board members. The former expressed reservations on restarting QE, while the latter was concerned about the impact of cutting rates on the banking system. But both ultimately agreed to back the package.

The divisions lend extra importance to Berlin’s choice on who will replace Ms Lautenschläger — and whether it opts for another hawk or someone more supportive of monetary easing. “This is an opportunity to heal some of the wounds,” said Katharina Utermöhl, senior economist at German insurer Allianz.

Angela Merkel, Germany’s chancellor, sounded a conciliatory note this week by saying eurozone governments should do more on structural reform and fiscal policy to take pressure off the ECB. “This political task that we have is, of course, not to overburden monetary policy,” she said.

ECB officials reject the idea that the divisions will prevent any further loosening measures.

Some economists believe Mr Draghi’s parting shot helped to reduce the pressure on his successor — who would have otherwise had a fight on her hands from her first day in the job. But others say the fierce divisions on the council undermined the impact of the easing package, pushing up interest rates after the meeting as traders bet it made a further rate cut less likely.

This, as well as a need to defend the ECB’s legitimacy, makes it a priority for Ms Lagarde to rebuild consensus.

“The bottom line is that Draghi has probably made Christine Lagarde’s life easier by putting all the issues on the table before she starts,” said Olivier Blanchard, who was chief economist at the IMF under Ms Lagarde’s leadership and now a professor at the Peterson Institute for International Economics.

“But she is still inheriting a really tough situation where it is clear that monetary policy — both conventional and unconventional — doesn’t have much more room to play with.”