Donald Trump had an errand that needed doing, and he had a loyal lieutenant in mind for the job.

“[Rudy] Giuliani is a highly respected man. He was the mayor of New York City, a great mayor, and I would like him to call you,” Mr Trump told his Ukrainian counterpart, Volodymyr Zelensky, in a July 25 phone call that may determine whether the 45th US president faces impeachment.

It was during that call that Mr Trump, according to a whistleblower, put pressure on Ukraine to help dig up dirt on his chief political rival, former vice-president Joseph Biden.

Mr Trump has dismissed the complaint, released by Congress on Thursday, as yet another partisan ploy to bring down his presidency. “The Democrats are trying to destroy the Republican party and all that it stands for,” he tweeted.

One thing is beyond dispute: Mr Giuliani’s place at the centre of the drama. The whistleblower complaint details his unique role as a private emissary for the president in his dealings with Ukraine, subverting the established diplomatic and national security structures to the consternation of many in Washington and Kiev.

“It’s a lethal combination of amateur diplomacy plus personal lobbying for Donald Trump,” a person close to Mr Zelensky complained. “There is a general understanding that Trump would refuse to speak with him unless the Biden issue was on the agenda.”

Mr Giuliani’s Ukraine adventure is inviting scrutiny, including of his consulting business. Yet to those who know him, that is just fine: he would prefer to be in the thick of the action as a Trump loyalist than to rest on his laurels as “America’s Mayor” and a hero of 9/11.

“There’s a gleam in his eye when he’s in the middle of the storm,” a confidante observed. “He could have spent the last 18 years being grand marshal of parades and collecting big fees for speeches. [But] he would rather be consequential than popular.”

There has been plenty of storms for Mr Giuliani, 75, in the Trump era. The two larger-than-life New Yorkers have been friendly for decades. Their bond deepened when Mr Giuliani campaigned for Mr Trump and then stood by him in the darkest moments of his White House run. Mr Giuliani’s fealty to the cause may have been strengthened by what associates say is a deeply held conviction about the venality and corruption of the Clintons.

His seemingly erratic appearances on cable television, defending Mr Trump against allegations of colluding with Russia, prompted speculation that the prosecutor who once brought down the New York mafia had lost his sharpness — and was possibly spending too many late nights at his favourite Manhattan cigar bar.

All the while, Mr Giuliani was dealing with an acrimonious divorce from his third wife, Judith Nathan, that has regularly featured in the tabloids.

His dogged approach appeared to have been vindicated when Robert Mueller’s report on Russian election interference was published in April and failed to recommend charges against Mr Trump.

Still, some associates worry that the Ukraine saga — and his tight bond with the president — pose risks for Mr Giuliani that he may not appreciate. As the confidante remarked: “Trump has a way of hurting even his friends.”

Mr Giuliani could not be reached for comment. His business ties to Ukraine stretch back more than a decade. Through the private consultancy he founded as his political career was waning he advised Kiev’s current mayor, boxer Vitaly Klitchko. More recently, he worked for Gennady Kernes, the powerful mayor of Kharkiv, a city on the Russian border, and a local oligarch, Pavel Fuks, who tried to persuade Mr Giuliani to open an investment office.

The saga now roiling Washington appears to have its roots in the days before the second round of Ukraine’s April presidential election — and in Florida. With Mr Zelensky in a commanding lead, the country’s then-prosecutor general, Yury Lutsenko, and close allies began speaking to The Hill, a Washington news site.

They alleged that Ukrainian officials had “interfered” in the 2016 US election on behalf of Mrs Clinton — essentially turning the Russia collusion narrative on its head. Mr Lutsenko also accused Mr Biden of pressuring Ukraine while vice-president in 2015 to shut down an investigation into Burisma, the natural gas company that paid his son $50,000 per month to serve as a director. He also smeared the US ambassador, Marie Yovanovitch, a career diplomat appointed by President Barack Obama.

The media campaign is now regarded by many in Kiev as an attempt by Mr Lutsenko to save his job by currying favour with the Trump administration. It was arranged with the help of Igor Fruman and Lev Parnas — two businessmen with Ukraine ties now living in Miami. The men became GOP donors and, according to Mr Giuliani, hired him to help develop an energy project in Ukraine.

Mr Lutsenko has since walked back many of his claims, saying that the younger Mr Biden did not violate the law. But Mr Giuliani would not be dissuaded. The change of administration in Ukraine presented an opportunity to try to reinvigorate the investigations.

On June 21, he tweeted: “New Pres of Ukraine still silent on investigation of Ukrainian interference in 2016 and alleged Biden bribery of [then-Ukrainian President] Poroshenko. Time for leadership and investigate both if you want to purge how Ukraine was abused by Hillary and Clinton people.” 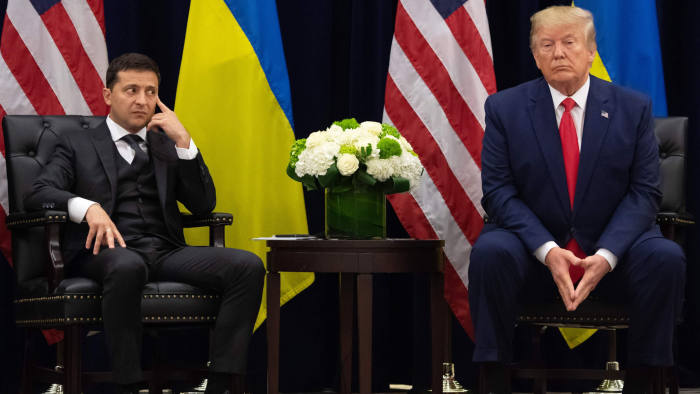 US President Donald Trump, right, and Ukrainian President Volodymyr Zelensky look on during a meeting in New York on September 25 on the sidelines of the UN General Assembly © AFP

Days after Mr Trump’s July phone call with Mr Zelensky, Mr Giuliani flew to Madrid where he met Andriy Yermak, an adviser to the Ukrainian president. According to the whistleblower’s complaint, that meeting was a “direct follow-up” to the “cases” that Mr Trump had raised in the phone call. Mr Giuliani also reached out privately to Andriy Bohdan, Mr Zelensky’s chief of staff, and Ivan Bakanov, head of Ukraine’s intelligence service, according to the complaint.

This separate track outside the usual diplomatic channels was unorthodox but not unusual for Mr Giuliani. As New York mayor, he established a separate intelligence operation for the New York Police Department, which regularly irked federal officials when its agents went overseas.

“It’s just weird. It’s not how business is conducted,” a former senior US intelligence official said, noting that Mr Giuliani — without a formal government post — could have been vulnerable to counter-espionage.

It appeared to unnerve Mr Zelensky’s team, too. According to the whistleblower complaint, they sought guidance from State Department officials on how to “navigate” Mr Trump’s requests after being led to believe that future military aid — vital in its conflict with Russia-backed separatists — would depend on Kiev’s “willingness to play ball”.

Viktor Ukolov, a political consultant in Ukraine, suggested the country — caught between American politics and a simmering conflict with Russia — was in a no-win situation. “The fact that Trump and Zelensky held talks demonstrates that pressure under Ukraine’s past leadership was unsuccessful, but that Trump found the opportunity with Zelensky and this ended up very not good for Ukraine,” Mr Ukolov said.

Meanwhile, as the Ukraine scandal has gathered pace, Mr Giuliani has returned to a familiar refuge: cable news. During an extended interview with CNN host Chris Cuomo that verged on a knife-fight, Mr Giuliani denied having ordered Kiev to look into Mr Biden — before confessing: “Of course, I did.” He later equivocated.