“This is a crossing place,” Sabahattin Alkans said as we drove along the shore of Lake Van at 11 o’clock in the morning. He had already shown me Van’s towering citadel, a mosque by the great Ottoman architect Sinan, a Seljuk tomb, ancient cuneiform inscriptions and images of Neolithic warriors in Van’s brilliant new museum.

So I might be forgiven for thinking that when he mentioned a crossing place, he was referring to this part of Turkey being somewhere people had always passed through, one of the corridors of civilisation, on the road to or from Mesopotamia, Persia, Central Asia. It turned out he had something more practical in mind: “the crossing . . . where we take the ferry.” And so we embarked for the short ride to Akdamar Island. On the way, I picked up snippets of Turkish, Armenian, French, German, an American accent, someone from Shepherd’s Bush, and mused about crossing places.

Akdamar is a small island with a big history. The beautiful Armenian Apostolic Cathedral of the Holy Cross was built 1,100 years ago out of a pink volcanic rock that still glows like ember under a blue sky. The island was home to a monastic community until 1915 when it was abandoned following the mass killings of Armenians at the hands of Ottoman troops.

The church was recently restored by the state, and once a year the Armenian patriarch is allowed to conduct a Sunday service. That it happened to be the day I was visiting is a case of what Turks might call kismet, or fate. There was a crowd outside and a queue going in because 10th-century architects building on a remote island did not plan for crowds. They did, however, imagine the effect of what they had built. They knew I would bend my head as I passed through the low outer door, walk across the big flagstones of the dark vestibule, then up tall stone steps into sunlit brilliance beneath a soaring dome. Pow! Even now it works brilliantly, like the raising of the curtain in a theatre. Flooded with sunshine, the church was filled with people and deep, melodic chants from two groups of priests, one in blue, the other red cassocks, a beautiful moment in a beautiful day that ended at another crossing place

In the course of six days, my trip would take me west from Van to Gaziantep, a journey of almost 700km. Late that first day we reached the 12th century Malabadi Bridge, near the town of Silvan. It was built to span a tributary of the Tigris, but as with so much in this region, the practical was endowed with grandeur and in this case a simple beauty. No wonder people from the neighbourhood like to drink tea here at the end of the day. Several enterprising people were running pop-up cafés to cater to them, and we joined them and some newly-weds who had come for a wedding photograph, the bride dressed like a Disney princess. While she posed, we crossed the water. On the other side of the creek, Sabahattin said, “Welcome to Mesopotamia”. 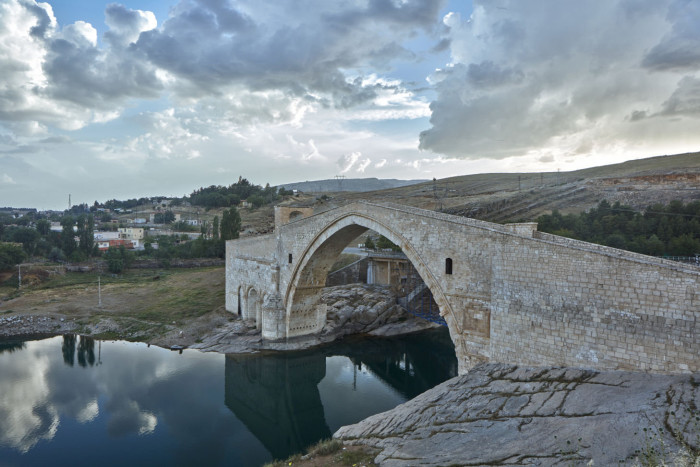 The Malabadi Bridge, completed in 1147

The name means “between two rivers”, the two being the Tigris, which we had now crossed, and the Euphrates to the west. Both of these biblical rivers rise in Turkey, flow through Syria and Iraq and into the Gulf, and, like the Nile in Egypt, they make life possible in these lands. We would spend the next couple of days crossing between them.

We started in the city of Diyarbakir, whose three-and-a-half miles of Roman walls are built from dour black basalt, a rock harder than granite, which might explain why they are still standing. In Van I had met Armenians, but Diyarbakir is mostly Kurdish, an idea that was supported by old men whose baggy black trousers had crotches that hung below the knees. Inside the walls, the old city is charming, bringing back memories of old Aleppo before the current conflict. The bazaar was lively and the air filled with coffee, spice and the thin, high-pitched reed piping of a zurna. In the old Hasan Pasa Han, or caravanserai, a passing liquorice seller rattled his metal cups until they chimed like bells to attract my custom, but Sabahattin was there before him, wanting to introduce me to a local speciality, coffee flavoured with pistachio. 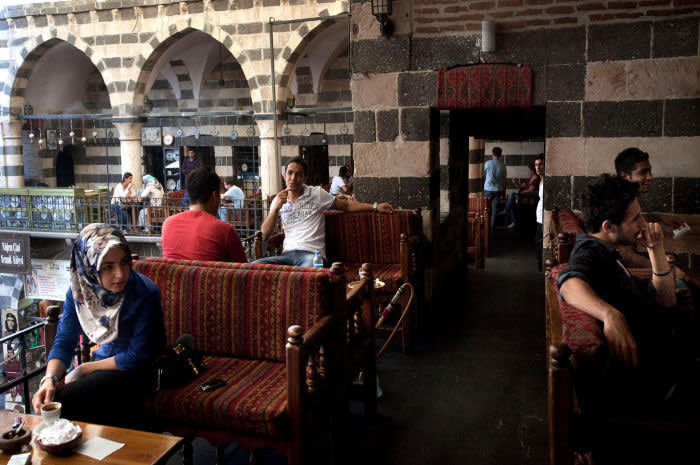 From the Han, we walked the long, straight and obviously Roman street towards the grand mosque, an 11th-century Seljuk take on the glorious early 8th-century Umayyad mosque in Damascus. Like the Damascus mosque, this functioned as a church before Islam, as a Roman temple before Christianity and no doubt as a spot sacred to some nature deity long before the legions arrived. But however impressive the mosque might be, I thought history sat more gloriously on the Church of the Virgin Mary, whose origins as a Syriac Orthodox church go back at least to the 3rd century. Like the mosque, it sits on the site of a much earlier pagan holy place, the Temple of the Sun.

The church was closed when we arrived, but Sabahattin made a call and Pasteur Youssef opened up, walking me to the Bible open on the lectern and explaining that when he holds a service (there are only 15 in the community now), he still conducts it in Aramaic, the language of Jesus. When we left, and as the pastor locked the blastproof door, I wondered why there was all this history here in Diyarbakir. Then Sabahattin took me down below the citadel, through the ancient market gardens (yet another Unesco Heritage site) to the Tigris, which flows below the citadel. I walked across the Ten-Eyed Bridge that spans it, another crossing place. 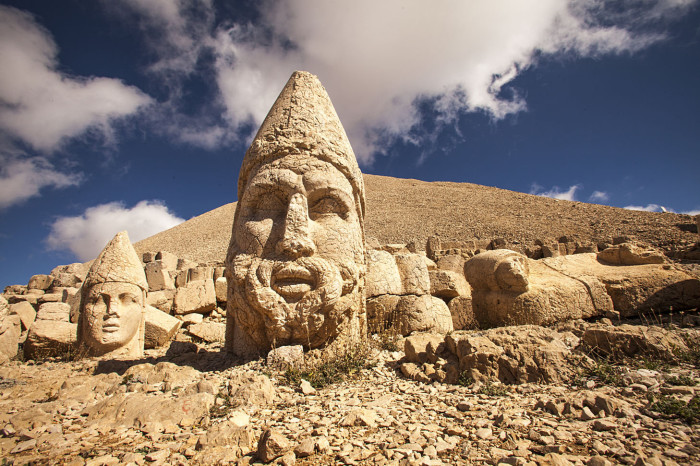 It had been sweaty-hot on the plain, but a sharp wind was blowing and it was cold that afternoon as we walked the final steps towards the summit of Mount Nemrut. Here, at 2,206 metres, an insignificant 1st-century BC local ruler chose to have himself buried. Antiochus claimed descent from Alexander the Great and the grandeur of his monument expresses some of his delusion. Its unexcavated cone-shaped top supposedly contains his remains, but more impressive were the platforms he built beneath the cone and lined with massive sculptures of gods and himself. Perhaps the most surprising thing about Antiochus’s monument, beyond its location, is that significant excavations only tool place in the mid-20th century, despite it sitting near a bridge that the Roman emperor Septimius Severus built over the Cendere river, a tributary of the Euphrates.

The following morning we were crossing land that Sabahattin said was until recently like a desert. Now, thanks to the many dams the Turkish government have built across the Euphrates and Tigris, there are rich plantations of pistachios, cotton, tobacco and olive. 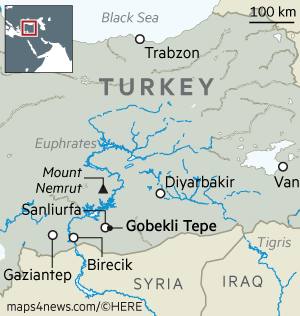 Then we were out of time. We were not yet at the end of the journey, but we had left recorded history because we were at Gobekli Tepe. If there was one reason for me to visit the region, this was it. Not because Turkey has declared this “the Year of Gobekli Tepe”, but because the small site is among the most startling monuments anywhere on Earth. The low hill, topped with a single fig-mulberry tree, is only partly excavated, but what is known so far has turned our idea of early human history upside down. Some 7,000 years before Stonehenge and Egypt’s Pyramids, hunter-gatherers built what is being called the first temple. It consists of at least 20 circles of 10-12ft T-shaped limestone pillars, some of them smoothed and carved with human and animal figures.

I was here six years ago, before the publicity, when Klaus Schmidt, the archaeologist who excavated the site, was still alive, and when the site was an open hillside protected by nothing more than a man in a cabin. Now it has been arranged for visitors, with fences, car parks built down the slope near a new visitors’ centre, walkways and a huge canopy erected above the main excavation. None of this detracts from the wonder of the place, nor from the thrill of standing 1,000 feet up, at the northernmost curve of the Fertile Crescent, of imagining who and how and why this place was built, nor of thinking that for thousands of years others have walked up this hillside, another crossing place.

Also standing there was a 60-year-old man in a black-and-white keffiyeh, baggy trousers and grey jacket. Mahmut Yildiz, the son of the man who owned the land on which Gobekli Tepe had been found, now works as its guardian. I asked how he felt about the discovery and he beamed. “I am so happy.” He waved a hand across the empty landscape. “Now all the world are coming to Gobekli Tepe.” 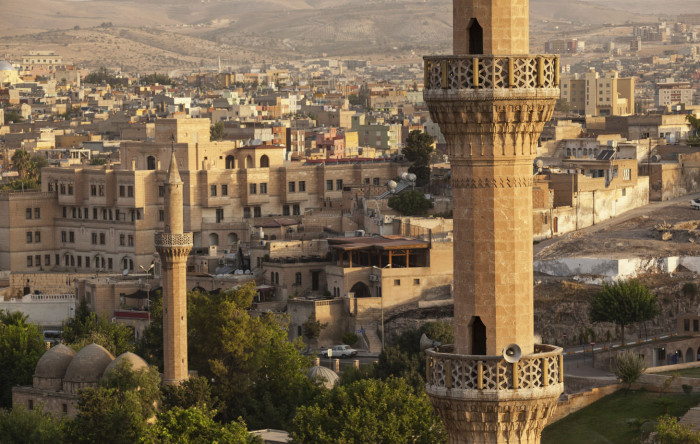 Minarets in the city of Sanliurfa

More of us are also going to nearby Sanliurfa, one of the most atmospheric cities in Turkey’s south-east. Urfa, as it is called locally, has had many lives, including as the Crusader city of Edessa and, millennia earlier, as the legendary birthplace of Abraham (Ur, in Iraq, is the more likely location for that). A citadel crowns Urfa, but the joy happens below, around carp pools that legend links with Abraham, in the cave/mosque that Muslims revere as the birthplace of the patriarch and in the tight-packed bazaar where one of the specialities is liver kebab with raw onion. There is also joy in the new museum, which houses finds from Gobekli Tepe and from Urfa itself, including the startling figure of 11,000-year-old Urfa Man, the world’s oldest life-size human sculpture.

What the museum lacked was visitors. That Urfa and this part of Turkey are not overwhelmed with the same people who mob the Acropolis in Athens and the Colosseum in Rome is of course the result of recent unrest in the region. But Mesopotamia is central to our sense of our own identity and the Turkish part of it is more accessible these days than Syria or Iraq. The lure of these very ancient sites and artefacts, and the fact that many of these discoveries have only recently been made, means visitors will surely return, and in great numbers.

A short drive west of Urfa, we came beneath the citadel at Birecik, another crossing point. Ahead was Gaziantep, home of Turkey’s best pistachios and baklava, but as we drove over the Euphrates bridge we bid a reluctant farewell to Mesopotamia.

Anthony Sattin was a guest of Steppes Travel (steppestravel.com). He flew into Van and out of Gaziantep, both of which have direct flights from Istanbul and Ankara. Gaziantep also has flights from some European cities and there is also a domestic airport at Sanliurfa. Steppes’ next group tour to the region departs on June 27, 2020, led by Sabahattin Alkans and Ian Colvin of the University of Cambridge School Classics Project. The 13-day trip starts at Trabzon on the Black Sea coast before travelling south to Van, Diyarbakir, Nemrut, Gobekli Tepe and Harran, flying out from Sanliurfa. It costs £2,895 excluding flights; accommodation is in modern hotels or three- to four-star guest houses. The company also offers private, tailor-made trips to eastern Turkey, from £2,500 per person for seven days. The UK Foreign Office advises against all travel within 10km of the Syrian border. For more on southeastern Anatolia, see goturkeytourism.com

Follow @FTLifeArts on Twitter to find out about our latest stories first. Listen and subscribe to Culture Call, a transatlantic conversation from the FT, at ft.com/culture-call or on Apple Podcasts