Shares of Alibaba and other Chinese companies plunged Friday in a sudden move after reports the White House is considering ways to limit U.S. investments in China.

Sources told CNBC’s Eamon Javers that the White House could include a block on all U.S. financial investments in China and the goal is to protect American investors. No decisions have been made and it’s nowhere near complete, the sources said.

Alibaba shares slipped more than 5% on the reports, while Baidu and JD.com also fell 3.6% and 6% respectively. Those stocks all trade on the Nasdaq. 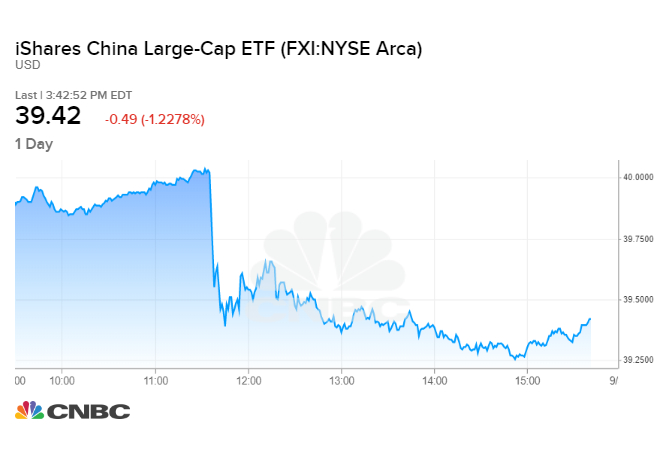 China’s currency, the yuan, weakened to 7.15 against the dollar on the news.

The moves by the White House would come as the U.S. and China are set to resume trade talks on Oct. 10 in Washington after both countries slapped billions of dollars of tariffs on each other’s goods. Delisting Chinese companies would affect billions of dollars in investment pegged to major indexes, just as the Chinese government is taking steps to increase foreign access to its markets.

In response to the reports, Nasdaq said, “One critical quality of our capital markets is that we provide non-discriminatory and fair access to all eligible companies. The statutory obligation of all U.S. equity exchanges to do so creates a vibrant market that provides diverse investment opportunities for U.S. investors.”

The exact details have not been worked out yet and the plan is subject to President Donald Trump’s approval, Bloomberg News reported, citing people familiar with the matter. Trump had greenlit the discussion, the report said.