After nearly three hours of questioning from members of Congress on Thursday, Joseph Maguire sighed.

The former Navy Seal — who as acting director of national intelligence has found himself at the centre of a furore that could lead to the impeachment of US President Donald Trump — had been asked again about his decision to withhold a whistleblower complaint from Congress.

Mr Maguire said he received the complaint on the second day of his new job. “I am the acting director of national intelligence, and I was still using Garmin to get to work.”

His reply elicited a laugh from those in the room, and proved a lighter moment in a three-and-a-half-hour marathon session of the House intelligence committee, in a week of relentless revelations regarding Mr Trump’s attempts to persuade his Ukrainian counterpart to get dirt on former US vice-president Joe Biden.

Mr Maguire repeatedly described himself as a “public servant” who was willingly testifying before the committee. But he did not hide the fact that he would have preferred not to be there, saying at one point: “My life would have been a heck of a lot simpler without becoming the most famous man in the United States.”

The intelligence committee had moved the televised hearing to a bigger room, usually reserved for the House committee on oversight and reform, to accommodate a large crowd. But not everyone was on the edge of his or her seat. One police officer casually asked a reporter who would be testifying, and whether it was going to be a “good one”.

Shortly after 9am, Mr Maguire sat down, as did Adam Schiff, the Democratic congressman from California who chairs the committee.

In his opening statement, Mr Schiff praised the still-anonymous whistleblower and asked Mr Maguire why he “stood silent when an intelligence professional under your care and protection was ridiculed by the president, was accused of potentially betraying his or her country”.

Seated to the chairman’s right was Devin Nunes, the ranking Republican on the committee who, like Mr Schiff, is from southern California. But Mr Nunes and Mr Schiff have clashed repeatedly in recent months, and Thursday’s hearing proved no different. 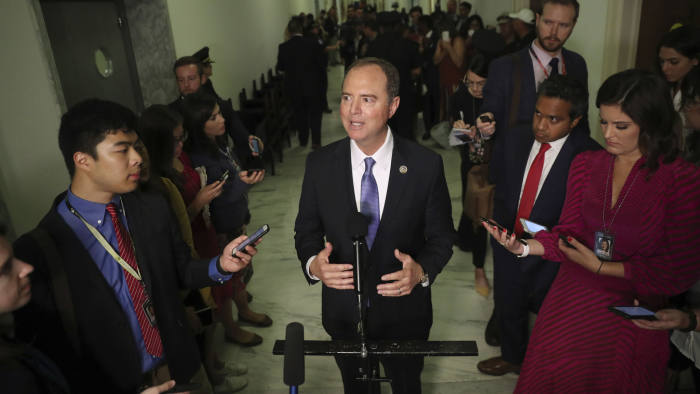 In his opening statement, Mr Nunes accused Mr Schiff and the Democrats of rolling out “their latest information warfare operation against the president” and gave side-eye to the journalists in the corner of the room when he called them “media mouthpieces” of the Democratic party that produce “fake news”.

Mr Schiff then preemptively launched into questioning the witness, before stopping himself and allowing Mr Maguire to make an opening statement. The acting DNI catalogued his decades of public service and insisted he was neither partisan nor political.

What followed were nonstop questions from the committee, with Democrats largely focused on Mr Maguire’s initial decision not to share the whistleblower complaint with Congress, rather than the substance of the complaint that had been published just before the hearing. Republicans used their time to praise Mr Maguire’s CV and his actions in dealing with the complaint, including his decision to withhold it from lawmakers after consulting with the White House.

The room was near silent throughout, bar the flurry of camera shutters as photographers in the “well” — the space below the members of Congress and in front of the witness table — leaned in each time the acting DNI became animated in his answers. Mr Maguire was largely calm and measured as he spoke, but grew increasingly defensive as the session went on.

Later, as Mr Schiff sought to wrap up the hearing by getting Mr Maguire to concede that the allegations in the whistleblower complaint merited further investigation, the acting DNI took a sharp inhale, saying: “Chairman, the horse has left the barn. You have all of the information.”

By that point, all of the Republican members of the committee had left the room, bar Mr Nunes, who stood by the door with his arms folded. Mr Schiff closed the session by declaring that Mr Trump’s actions represented the “very negation of democracy”.

Mr Trump tweeted that Mr Schiff had “zero credibility”. When asked what he made of that comment, the chairman replied: “I’m always flattered when I’m attacked by someone of the president’s character.”