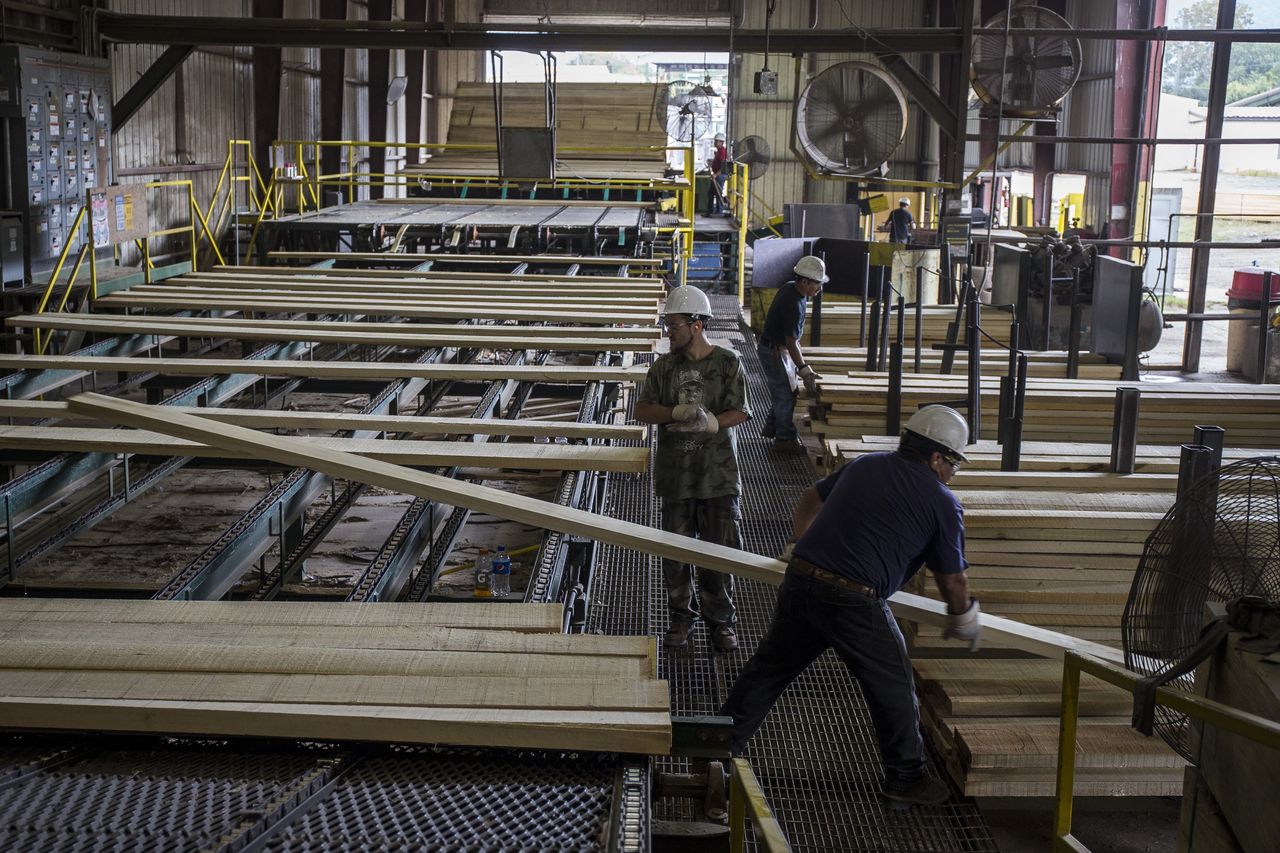 President Trump shouldn’t get all the credit—or blame—for manufacturing job gains and losses, employer-provided health-coverage costs topped $20,000 this year, and millennials and younger Gen Xers are leaving big cities and heading for the suburbs. Anything else going on in world news this week? Here’s our economic coverage for Thursday.

Since President Trump took office, one of the manufacturing sectors with the fastest growing employment has been mining and oil-and-gas machinery, up 25%. One of the worst-off has been cut-and-sew apparel contractors, down 22%. Neither performance is because of Mr. Trump, Sarah Chaney and Anthony DeBarros write.

Revised U.S. gross domestic product for the second quarter is expected to show no change from a prior estimate of 2% annualized growth. (8:30 a.m. ET)

The Kansas City Fed’s manufacturing survey for September is expected to rise to minus 4 from minus 6 a month earlier. (11 a.m. ET)

China was a savior of sorts for the U.S. hardwood lumber industry after the financial crisis last decade. Customers there kept buying oak and ash boards in large quantities, while construction and furniture production fell in the U.S. Now, after Beijing imposed retaliatory tariffs of up to 25%, exports of hardwood lumber to China have fallen 40% this year. The lower demand pushed U.S. hardwood lumber prices down and prompted companies to seek government assistance, Austen Hufford reports. “It’s a crisis the likes of which we just never had to deal with before,” said Matthew Gutchess, president of Gutchess Lumber in Cortland, N.Y.

The average total cost of employer-provided health coverage passed $20,000 for a family plan this year, up 5% from a year earlier, according to a Kaiser Family Foundation survey. The rate of growth in coverage costs, including those borne by employees, continued to outstrip rises in inflation and wages, squeezing workers despite a low unemployment rate that might encourage companies to sweeten their benefits, Anna Wilde Mathews reports.

Who Needs a House Out in Hackensack?

Large U.S. cities lost tens of thousands of millennial and younger Gen X residents for the fourth consecutive year. The latest drop was driven by a fall in the number of urban residents between 35 and 39 years old—the majority who leave are heading to suburbs. City officials say that high housing costs and poor schools are main reasons, Janet Adamy and Paul Overberg report.

The Elephant in the Room

Speaker Nancy Pelosi said the House would move ahead with an “official” impeachment effort—something that’s not really an economic issue. But it could have some economic repercussions: “U.S. political dysfunction will rise to new levels,” says Suttle Economics’s Phil Suttle. That means more political uncertainty for businesses, less likelihood the House will approve a revamped Nafta, and a tougher path for Congress to extend spending authority and avoid another shutdown.

That doesn’t mean policy stalls. U.S.-China trade talks pick up next month, and Mr. Trump and Japan’s Prime Minister Shinzo Abe on Wednesday signed a trade-enhancement agreement that will lower agricultural tariffs in Japan, industrial tariffs in the U.S. and set new rules for digital trade between the world’s first- and third-largest economies. The U.S. and Japan kept the negotiations limited in scope to avoid the need for Congress to vote on the deal.

In the decade since the global financial crisis the U.S. financial system in many ways is much safer, with banks far less likely to fail or need a taxpayer bailout. Yet in other ways it is also more brittle, as the channels that carry cash and securities between investors, banks and foreigners repeatedly clog in the face of stresses they once easily absorbed. The latest example is last week’s spike in interest rates on so-called repo loans, which are critical to the functioning of Wall Street. It follows “flash crashes” in Treasury bonds, foreign currencies and blue-chip stocks, and spikes in stock-market volatility. None has yet threatened the broader economy or markets. Yet a crisis or shock originating in the real economy could be amplified by a dysfunctional financial system, Greg Ip writes.

Argentina faces a crisis. Again. Latin America’s third-biggest economy is repeating a pattern that has dogged it for over 70 years, running out of hard currency while grappling with high inflation and economic contraction, Santiago Pérez and Ryan Dube report.

New York state in 2014 started raising its minimum wage toward $15 an hour. Pennsylvania held fast at the $7.25 federal minimum. What happened along the border between the two states? New York’s higher pay “appears to have had a positive effect on average wages but no discernible effect on employment,” New York Fed economists Jason Bram, Fatih Karahan and Brendan Moore write.