Boris Johnson will put his controversial claim that his Brexit opponents are “surrendering” to Brussels at the heart of the Conservative election campaign, despite warnings he was inflaming “hatred” and as a Labour MP’s office was attacked.

The prime minister’s aides said the “surrender” message will be central to Tory tactics, just as Vote Leave made its contested claim that EU membership cost Britain £350m a week the focus of its 2016 referendum campaign.

Mr Johnson was condemned by his opponents after he repeatedly dubbed legislation to stop a no-deal Brexit “the surrender act” and accused opposition MPs of trying to “sabotage” the UK’s departure from the EU during a toxic parliamentary debate on Wednesday.

“The surrender act is the new £350m,” said one ally of Mr Johnson. The prime minister told Tory MPs that he would continue to make the charge, claiming that Labour was complaining because the message was hitting home.

I cannot say it’s directly linked to Boris but my London office phone has had to be unplugged as all day the line has been jammed with people shouting traitor and c**t at my staff. I stood up to Boris Johnson and I must be punished 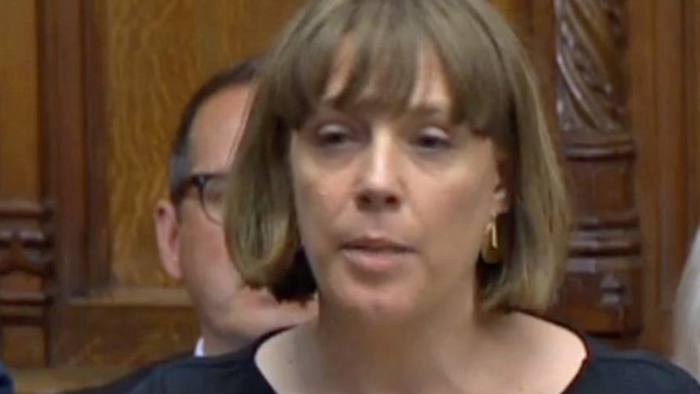 Mr Johnson was widely criticised for saying in the House of Commons debate on Wednesday that the best way to honour Jo Cox, the Labour MP murdered by a far-right extremist in the EU referendum campaign, was to “get Brexit done”.

Jess Phillips, the backbench Labour MP who on Thursday secured a debate about Mr Johnson’s choice of language, accused him of using words “entirely designed to inflame hatred and division”.

It later emerged that Ms Phillips’ office in her Birmingham Yardley constituency had been attacked. A man was arrested after trying to enter the office, allegedly accusing the MP of being “a fascist”.

Ms Phillips said: “I cannot say it’s directly linked to Boris but my London office phone has had to be unplugged as all day the line has been jammed with people shouting traitor and c**t at my staff. I stood up to Boris Johnson and I must be punished.

“I don’t think he directly wants that but he is running a purposeful strategy of people versus parliament. This is the result.”

West Midlands police said a 36-year-old man had been arrested “on suspicion of a public order offence and possession of cannabis”.

Mr Johnson’s comments about Cox were also denounced by his own sister, the journalist Rachel Johnson.

“I do think it was particularly tasteless for those grieving a mother, MP and friend to say the best way to honour her memory is to deliver the thing she and her family campaigned against,” Ms Johnson told Sky News.

Meanwhile Ellie Cooper, the daughter of Labour MP Yvette Cooper, pleaded with politicians to tone down their language.

She tweeted she was “scared every single day” for the safety of her mother. “I am scared when I scroll through the replies to her tweets calling her a liar and a traitor,” she said.

Later on Thursday, Mr Johnson appeared to moderate his language. “We do need to bring people together . . . Tempers need to come down,” he told the BBC. He accepted that he needed to “reach out across the House to get Brexit done”.

But the prime minister’s provocative language could make it harder for him to secure the Brexit deal that he still hopes to finalise with the EU next month, as Labour MPs from Leave areas claimed they were now unlikely to back a withdrawal agreement.

Lisa Nandy, who has previously considered backing Theresa May’s deal, accused Mr Johnson of using “horrendous, divisive language”. “For those of us who do want to work cross-party to achieve a deal, this is making it much more difficult,” she said. 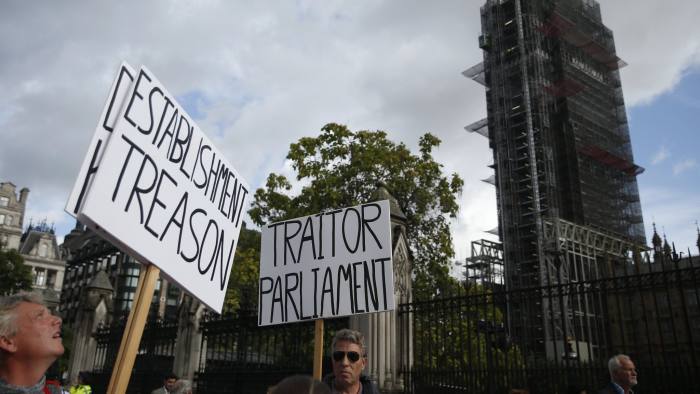 Mr Johnson’s team insisted that ultimately Labour MPs in Leave areas will back a deal or face the wrath of their constituents, but in Brussels there is also a growing belief that the prime minister will be unable to get a withdrawal agreement approved by parliament.

“We will continue talks, but Brexit negotiations have effectively reached a dead end since the Johnson government quite simply won’t find the votes to deliver,” said one EU diplomat.

John Major, the former Tory prime minister who was among the politicians who successfully brought a legal challenge against Mr Johnson’s move to suspend parliament, renewed his attacks.

He accused Mr Johnson of destroying any hope of a cross-party agreement on Brexit, saying most Conservatives “abhor the language of division and hate — and words such as ‘saboteur’, ‘traitor’, ‘enemy’, ‘surrender’, ‘betrayal’ have no place in our party”.