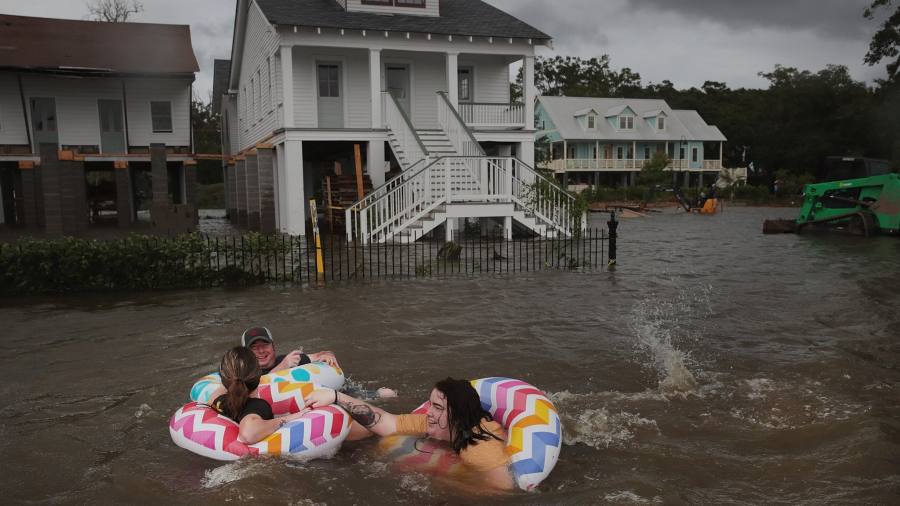 This week Greta Thunberg, the teenage activist, stole the show at the UN General Assembly meetings in New York with an impassioned plea for urgent action on climate change.

It was electrifying. However, if investors need a further reason to wake up, they should take note of another event: the release by a UN-supported entity, called Principles for Responsible Investment, of a report warning that “financial markets today have not adequately priced-in the likely near-term policy response to climate change”.

Indeed, the PRI — whose membership includes some 500 global asset managers — predicts a market “response by 2025 that will be forceful, abrupt and disorderly because of the delay”. In plain English, they expect a market shock.

And if this sounds too abstract to be meaningful, Dickon Pinner, a McKinsey consultant, gave the UN a couple of examples of where “disorderly” repricing might occur. Coastal regions such as Florida, he warned, could deliver asset price shocks for lenders, insurers and homeowners. So, too, in places such as Spain, southern France, Greece and Italy which are projected to see eye-popping increases in drought.

Meanwhile, the analysis circulating in the halls of the UN this week was even more startling. Jupiter, a climate advisory group, for instance, recently showed me the type of modelling it is performing for banks and insurance companies in the US. Using a synthetic portfolio of 100,000 residential mortgages in southern Florida — based on the exposure of a real bank — Jupiter forecasts a tripling of losses from flood damage in the next couple of decades.

This is partly due to the rising frequency of headline-grabbing weather events, like hurricanes. But the main reason for projected losses is the increasing chronic risk, such as floods that are less than one foot in depth but which will be hitting an expanding share of houses every couple of years.

This will hurt insurance groups. It could also be devastating for some homeowners: while American households typically use 30-year mortgages to buy properties, the price of insurance is reset annually. There is, in other words, an embedded maturity mismatch in risks in the Florida property markets that could spark mortgage defaults, hurting borrowers and lenders.

“This is not priced into markets,” says Rich Sorkin of Jupiter. Or as Hans Helbekkmo, an analyst from McKinsey, observes: “Based on this Jupiter analysis, our own analysis suggests that we could see loss rates [from mortgage defaults] similar to the 2007 [subprime crisis] in the next 10 to 20 years.”

But equally shocking is how complacent many investors and politicians still appear to be about these risks. Part of the problem is that politicians rarely want to break bad news to voters voluntarily.

Another issue is that the finance industry and policymaking circles today are plagued by the same structural patterns that prevented most investors from understanding the dangers posed by subprime mortgages more than a decade ago. Today, a small number of insurance experts and climate change scientists understand the risks. So do some savvy financial players, including hedge funds.

But most ordinary investors have little grasp of the full implications, because climate science — like mortgage derivatives — is technically complex. Even professional asset managers struggle to work out the probabilities embedded in insurance forecasts. The result is extreme information asymmetry.

Worse still, silos inside financial institutions and government agencies impede rational planning. And the long-term nature of the problem leaves some investors assuming that government bodies such as the US Federal Emergency Management Agency will create a safety net. This complacent assumption is probably as flawed as the widespread belief before the 2008 crisis that federal institutions in America would protect mortgage markets from shocks.

So how will this end? It would be nice to think that the work by the PRI and others will now prod investors, insurers and banks into the type of timely action that would enable asset prices to adjust smoothly. It would be even nicer if governments heeded Ms Thunberg’s appeal and tackled climate change, as well as becoming more honest with voters about what lies ahead.

But don’t bet on this happening. History shows that extreme information asymmetries produce market shocks. That’s what happened in the subprime mortgage saga. It is hard to believe it will be any different with climate change.

For more on sustainable finance and investing, take a look at our weekly newsletter full of breaking news, curated content and smart analysis on this bubbling revolution.