When Judy (opening Friday) premiered at the Toronto International Film Festival earlier this month, Renée Zellweger received a three-minute standing ovation for her pitch-perfect portrayal of Judy Garland. The Academy Award-winning actress’s performance had her belting brassy show tunes with twitchy élan one minute and fending off heartbreak with booze and pills the next. Helmed by British theater director Rupert Goold, Judy chronicles Garland’s disastrous last hurrah at London nightclub Talk of the Town a few months before her death in 1969 at age 47.

For Zellweger, back from a lengthy showbiz hiatus, stepping into the legendary Garland persona required a stretch of epic dimensions, according to her director.

“Renée’s not at all like Judy,” Goold tells Fortune. “She’s blonde, blue-eyed, clean-living, she shows up on time, she’s quite shy. She was drawn to the ‘other’ and like a lot of actors, Renée rushed toward the mask. But at the same time, it’s the director’s job to sort of drag the actor through the mask and reveal something deeper.”

Working from the outside in to construct a beguiling “mask” for his star, Goold assembled a team of experts that transformed Zellweger into a character that looks, sounds and feels very much like Judy Garland in all her ragged glory. Here’s how they did it.

Hair and makeup designer Jeremy Woodhead (Stan & Ollie, Dr. Strange) initially experimented with prosthetics that reshaped Zellweger’s face in Garland’s image. “We started off thinking about how to make Renée’s oval face more diamond-shaped like Judy’s,” Woodhead says. “We tried building out Renée’s cheekbones to get the more gaunt Judy look and did two or three tests of varying thicknesses.”

The filmmakers opted for a less-is-more approach.

“We didn’t want to risk losing some of Renée’s performance behind the prosthetics so we ditched the cheeks and just applied a prosthetic piece on the end of the nose to make her nose appear turned up like Judy’s. It was a very small piece but I think it effectively closed the gap between the two faces.”

Next came the teeth. Zellweger has “very California teeth,” Goold notes, and the perfect smile needed to be reworked for authenticity’s sake. Woodhead explains: “By the end of her life, Judy’s teeth were quite snaggled. It was important to change Renée’s modern dentistry to echo Judy’s slightly misaligned top set. Chris Lyons, our tooth expert, made about eight sets before we settled on a design that altered Renée ‘s mouth just enough to suggest Judy.” 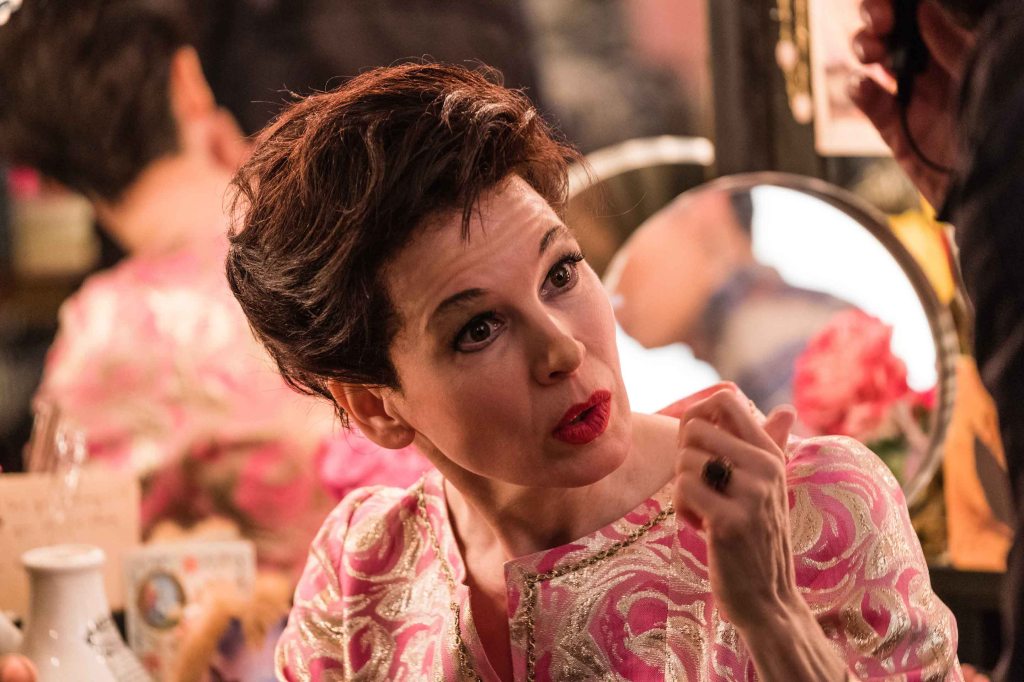 Renée Zellweger as Judy Garland in the film “Judy.” Prosthetics, aging paintwork, and a wig helped transform the actress into Judy Garland.

And, for the crowning touch, Woodhead designed a wig closely modeled on Garland’s spiky short-cropped hairdo. “I trawled through lots of reference photos and YouTube clips to find a length and style that best exemplified Judy’s look,” he says. “We all agreed on the iconic upswept hairdo you see in the film, which Judy wore for most of the ’60s.” The wig was made in Los Angeles by Natascha Ladek, cut and darkened to a walnut brown by Woodhead.

“We wanted Judy to look like she was from a slightly different era from the young people wandering the streets of swinging London of the late ‘60s,” Woodhead says. “The hair needed to look ‘done,’ because maintaining her image was important to Judy. On the other hand, she was always fiddling with her hair and we wanted Renée to get her hands in there too, so the wig couldn’t be locked down with immoveable hair spray.”

Most of the movie’s opening half-hour tracks Garland as she shepherds her two children around Los Angeles at night, broke and virtually homeless, but looking every bit the movie star in a shimmering orange brocade pantsuit. Costume designer Jany Temime (Skyfall, Harry Potter and the Half-Blood Prince) cites the vivid ensemble as one of her favorite looks for Zellweger/Garland. “It’s so ’60s!” she says. “Also, Judy’s an American so she wears trousers more than English women.”

Goold adds, “What I love about that pantsuit is that it has a slight rock and roll feel. To me, she looks a bit like Elvis. It was important that Judy not just be this character your grandmother knows. In spirit, she was a rock and roll artist and I wanted it to feel like she’s in the same tradition as Janis Joplin or Amy Winehouse.” 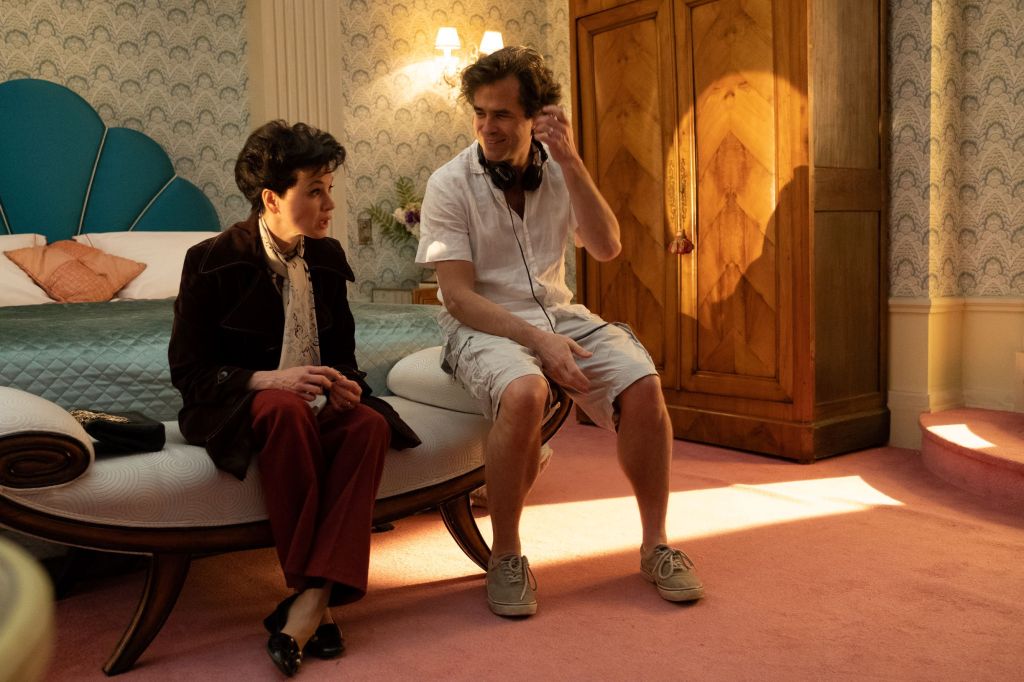 Renée Zellweger and director Rupert Goold on the set of “Judy.”

In the film, Zellweger as Garland nearly always wears an elegant scarf to protect her throat. Temime, raised in France, accessorized the actress with scarves collected by her own stylish mother. “Those original Dior and Hermes scarves you see in the film came from my late mother, and same for the Chanel bags and jewelry,” Temime says. “Renée wore them with great pleasure.”

Temime and her five-person workshop created most of the outfits from scratch. They also sourced original couture pieces from vintage shops in Paris and London’s 179-year-old Angels Costumes. Temime then tailored the clothes to accommodate Zellweger’s body language. “Renée took a very specific posture to play Judy, a little hunchback, so we made the costumes accordingly,” Temime says. “We also made the trousers a little too big to suggest the constant weight loss. It was hard work but I think those little details helped Renée to become Judy.”

Zellweger proved she could sing with her Oscar-nominated “Roxie Hart” performance in 2002 movie musical Chicago, but Goold wanted to make sure she could handle Garland’s fabled repertoire. Of his first meeting with Zellweger in London, he recalls: “I contacted my musical director friend Martin Lowe, who’d worked on the Mamma Mia! movie, and asked him to spend a couple of sessions with Renée—without me there—just to see where her voice sits.”

Zellweger made a strong impression.

“Martin said her instrument is a bit out of practice but it’s got a really nice sound and she has good pitch,” says Goold, who then got together with Zellweger around a piano at Abbey Road Studios to listen for himself. “Renée was a bit self-conscious, but she sang ‘Over the Rainbow’ and ‘The Man Who Got Away’ beautifully,” he said. “It was a mind-tingling moment for me and at that point, I knew I wanted to build this story with Renée.” 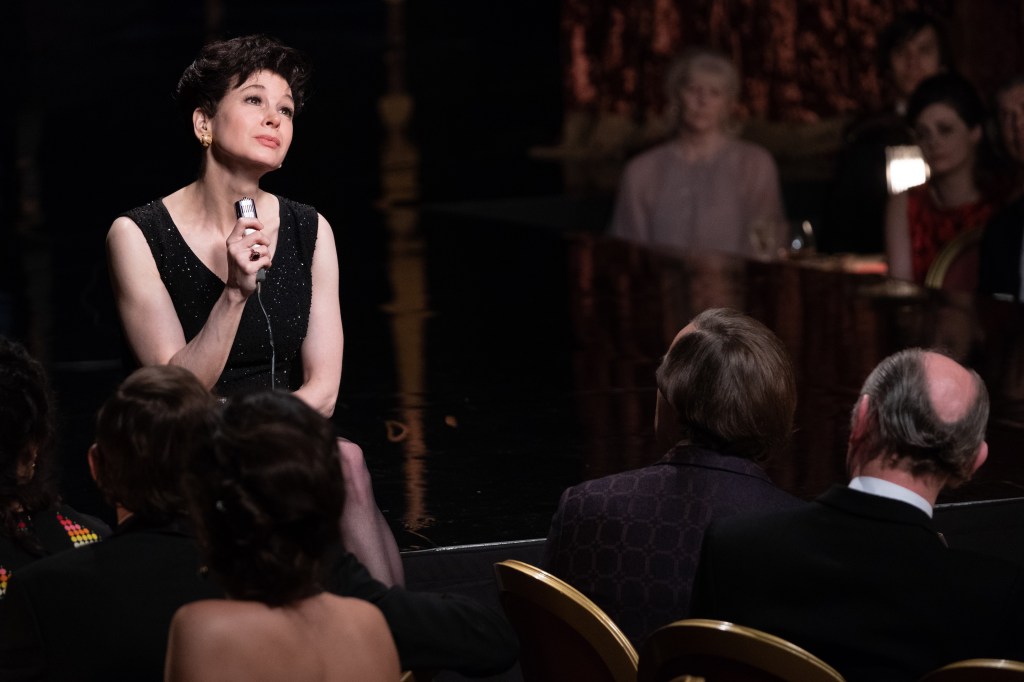 Back in L.A. Zellweger trained for a few months with vocal coach Eric Vetro, whose clients include Ariana Grande and Bette Midler. Returning to London for pre-production, Zellweger mastered Garland’s throaty “Mid-Atlantic” accent with dialect coach Brett Tyne, worked on her dance moves with choreographer Lynne Page (Billy Elliott), and rehearsed with musical director Matt Dunkley. She recording the songs in-studio as backup, but in most cases, she performed the numbers live on set.

“I never intended to use the pre-recorded stuff unless Renée ran out of breath or something,” says Goold, who fondly remembers the time Zellweger crooned “Somewhere Over the Rainbow” for an audience of extras.

“She really went for it,” he says. “After the first take I went down to give her a note: ‘Don’t sing it, don’t sing it, just think it.’ I wanted to make that familiar lyric and song feel fresh. And walking through this crowd of supporting actors, I noticed a lot of people in tears. I thought, ‘Wow, if these experienced, well-traveled, underpaid British extras are in tears, hopefully, the performance is going to translate on the camera reel.'”

—The Good Place creator Mike Schur on the show’s final season
—Inside Downton Abbey‘s journey from small to big screen
—Reese Witherspoon’s book club is keeping Hello Sunshine on top
—As RuPaul’s Drag Race expands to the U.K., DragCon shines light on its mainstream success
—Inside Succession‘s corporate melodrama with Adam McKay and Kieran Culkin
Follow Fortune on Flipboard to stay up-to-date on the latest news and analysis.