The White House failed to dampen the rapid impeachment momentum among House Democrats by releasing a ‘transcript’ or readout from a call with Ukrainian President Volodmyr Zelensky—in fact, the release had the opposite effect, with House Democrats jumping on the call as being the White House’s own admission that President Donald Trump had pressured a foreign leader to investigate a political rival.

The White House released a readout of the July call, in which Trump urged the Ukrainian leader to “do us a favor” and start a corruption investigation into a potential 2020 presidential opponent, Joe Biden, while mentioning the United States’ military aid to Ukraine.

Democrats immediately went on the offensive and said that the call and the readout of it would become a central part of their impeachment inquiry, which is proceeding under six committees that are investigating the president.

“At the end of the impeachment inquiry, a recommendation as to how precisely to proceed with possible articles of impeachment, with the emphasis being on the abuse of power that took place with Donald Trump pressuring a foreign government.” Rep. Hakeem Jeffries (D-N.Y.), the number-five Democrat in House Leadership and a backer of impeachment, told reporters. He added that the call readout was “exhibit A” that the president abused his power.

The call notes, despite containing ellipses and not actually being a verbatim transcript of what the president said, represented something of a gift for House Democrats. For months, Democrats have been trying to get current and former administration officials to testify before Congress about the Mueller Report and obstruction of justice allegations, without much success. And the administration has refused to let those officials testify, while one campaign official, Corey Lewandowski, testified, and the hearing quickly degenerated into a shouting match.

With the readout, they had a public document that confirmed what they see as a clear-cut case that the House should impeach the president.

Rep. Gerry Connolly (D-Va.), a member of the House Oversight Committee tasked with investigating the president, predicted that the readout would make it more likely that the full House would vote on articles of impeachment.

“I laid out four articles—this is article five,” he said. “I don’t think we lack investigative facts. I think the president has been very generous in providing those himself.”

Related: What the latest polling tells us about public support for impeachment

“There’s testimony no more substantial than what the president released today,” Rep. Val Demings (D-Fla.), a member of the House Judiciary Committee, told Fortune. “Yesterday, we made the decision that we have to act and we have to act expeditiously.”

Ahead of the release of a “credible” and “urgent” whistleblower complaint reportedly detailing the Zelensky call to Congress, House leadership also seized on the call readout. 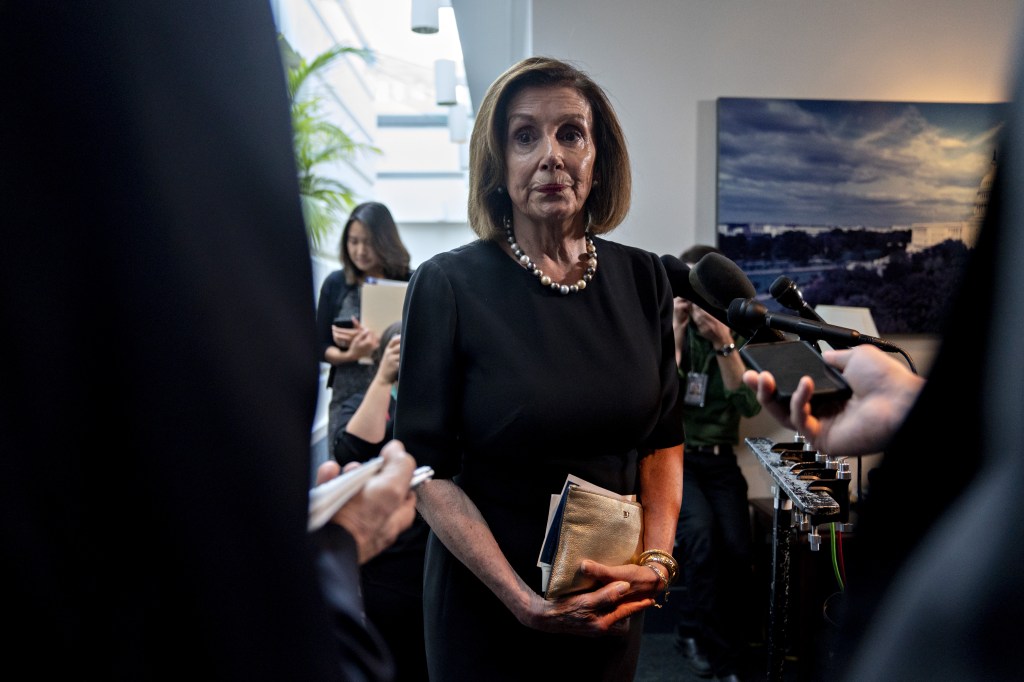 U.S. House Speaker Nancy Pelosi, a Democrat from California, pauses after speaking to members of the media after a Democratic caucus meeting at the U.S. Capitol in Washington, D.C., U.S., on Wednesday, Sept. 25, 2019.

House Speaker Nancy Pelosi (D-Calif.) and, jointly, the chairmen of the House Committees on Oversight, Judiciary, Intelligence, and Foreign Affairs committees released statements about the call that mentioned the impeachment inquiry. Pelosi, who only came out in favor an impeachment inquiry on Tuesday after months of demurring, said “the transcript and the Justice Department’s acting in a rogue fashion in being complicit in the President’s lawlessness confirm the need for an impeachment inquiry.”

The call readout also vindicated a group of seven Democrats that had been resisting impeachment until September 23, until they came out—albeit conditionally—for impeachment in a Washington Post op-ed, citing news reports of the call between Trump and Zelensky as evidence for their sudden shift.

“I know there’s a whole separate conversation about the whistleblower, and security assistance, for me—it’s about that top-line request,” said Rep. Elissa Slotkin (D-Mich.), who co-authored the op-ed and represents a district that Trump won in 2016, referencing Trump’s dangling of military aid in the call where he urged Zelensky to investigate Biden. “For me, it [the readout] reaffirmed the nature of the conversation, which is that the sitting president of the United States used the full weight of his office to reach out to the president of another country and ask him for dirt on a political opponent. He acknowledged that in the transcript.”

As House Democrats neared a 218-vote majority supporting an impeachment inquiry, the call readout was not viewed as impeachable conduct by all members. “There are some things in there that concerned me a little bit,” said Rep. Jeff Van Drew (D-N.J.) on the readout, who does not favor impeachment. “Whether that’s really impeachment-worthy is a different question.”

Still, Van Drew’s view was an increasingly rare one among the 235-member Democratic caucus. The overwhelming view was that the readout was damning, and would be a central part of Democrats’ impeachment case.

“It’s treason,” said Rep. Peter DeFazio (D-Ore.), “and treason, the last time I checked is an impeachable offense.” Of possible articles of impeachment, he predicted the Ukraine call “would certainly be near the top of the list.”

—What is CrowdStrike? Trump mentioned the company in his Ukraine call
—What the latest polling tells us about public support for impeachment
—These are the key players in the Trump impeachment inquiry
—How impeachment momentum massively shifted among democrats
—The 25 most powerful women in politics
Get up to speed on your morning commute with Fortune’s CEO Daily newsletter.