Donald Trump insisted on Wednesday that he favoured transparency towards congressional impeachment proceedings, setting the stage for investigators to access an intelligence whistleblower who raised alarms over White House efforts to seek Ukraine’s help in digging dirt on political rival Joe Biden.

Even as he attempted to show he had nothing to hide in his contacts with Volodymyr Zelensky, the Ukrainian president, Mr Trump sought to turn the spotlight on to Mr Biden and his son Hunter, repeating widely disputed allegations that the former US vice-president sought to squelch an inquiry into his son’s business dealings in Ukraine.

Despite the release of a White House summary of a July phone conversation between Mr Trump and Mr Zelensky showing the US president asked his Ukrainian counterpart to look into Hunter Biden’s business dealings, Mr Trump insisted at a news conference he did not apply pressure on Kiev to do his bidding.

“I didn’t do it,” he said on the sidelines of the UN General Assembly in New York. “I didn’t threaten anybody. No push, no pressure, I didn’t do anything . . . You take a look at that call, it was perfect. There was no quid pro quo.” 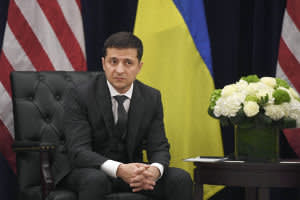 Mr Trump said he would also release a transcript of the first telephone call that he held with Mr Zelensky when the former comedian was elected.

“It’s all a hoax. I call it ‘the hoax’. And this is just a continuation of the witch hunt.”

Mr Trump was speaking a day after Democrats in the House of Representatives opened impeachment proceedings into the US president’s efforts to persuade Mr Zelensky to investigate the Bidens.

Critics say the call was an abuse of power, accusing Mr Trump of improperly using his office to enlist a foreign nation’s help in furthering his 2020 political ambitions. They also allege Mr Trump put US national security at risk by using almost $400m in military aid as leverage over Ukraine, an American ally fighting a low-grade conflict with Russian-backed separatists in its eastern Donbass region.

But he has instead found himself engulfed in a political scandal that has resulted in his becoming only the fourth US president — after Andrew Johnson, Richard Nixon and Bill Clinton — to face impeachment proceedings in the House.

Mr Trump lashed out at Democrats on Wednesday, saying they were pursuing another baseless “witch hunt” because of frustration that the Russia investigation led by special counsel Robert Mueller did not legally ensnare him.

At the news conference Mr Trump said Democrat Nancy Pelosi, the House Speaker, had capitulated to “radical far-left socialists” in her party. Mr Trump said he believed that the Democratic pursuit of impeachment could help him politically as he campaigns for re-election in 2020.

But Ms Pelosi, who launched the impeachment proceedings, on Wednesday said the transcript of the July phone call proved Mr Trump had abused his office.

“I respect the responsibility of the president to engage with foreign leaders as part of his job. It is not part of his job to use taxpayer money to shake down other countries for the benefit of his campaign,” Ms Pelosi said.

Shortly before his news conference, Mr Trump held a previously scheduled meeting with Mr Zelensky on the sidelines of the UN gathering. The Ukrainian president was asked by reporters whether he had come under pressure from the US president in the July 25 telephone call.

“I think you read everything. I don’t want to be involved to democratic elections of USA,” Mr Zelensky responded in English, before adding about the phone conversation that “nobody pushed me.”

In a light-hearted exchanged that belied the gravity of the situation for Mr Trump, the US president said “he’s made me more famous and I’ve made him more famous”. A former comedian, Mr Zelensky joked that their meeting was “better . . . than by phone”.

The unfolding controversy is expected to take another turn on Thursday when Joseph Maguire, the acting head of the US intelligence community, testifies before the House intelligence committee.

Mr Maguire had angered Democrats by refusing to provide a copy of the complaint despite a legal obligation to do so. The Washington Post reported on Wednesday that Mr Maguire had threated to quit if the White House tried to block him from testifying in full, but Mr Maguire later denied he had ever considered resigning.