When Masayoshi Son’s SoftBank turned on Adam Neumann, triggering the boardroom coup that led to his resignation as chief executive of WeWork on Tuesday, it was a remarkable rift between the controversial co-founder and his largest investor, which has channelled $10.65bn into the office leasing company.

With his future still in the balance at the weekend, Mr Neumann’s response was to call on another of the important financial figures in his orbit: Jamie Dimon.

Sunday’s visit to meet the JPMorgan Chase chief executive ultimately did nothing to halt Mr Neumann’s fate, but it did highlight the depth of a relationship between the entrepreneur and Mr Dimon’s bank, which began courting him when he had just one building. Wall Street executives have fallen over themselves to woo Mr Neumann and his company, but it was JPMorgan that won the coveted lead role on an initial public offering designed to bring in at least $3bn to cover WeWork’s swelling losses, plus $6bn in an associated debt financing. 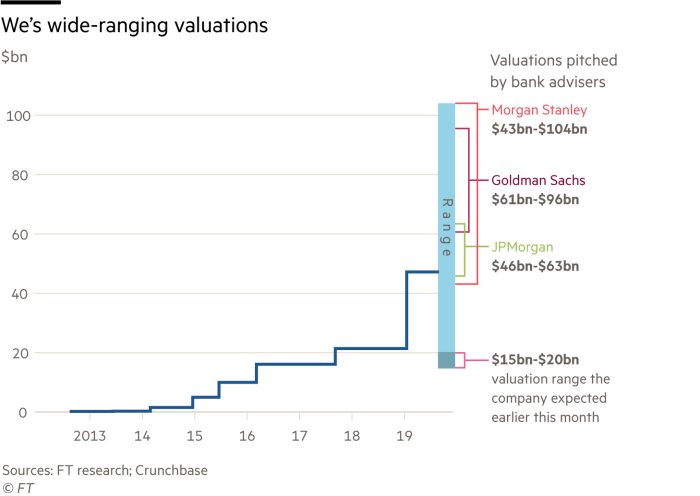 But stock market investors thumbed their nose at WeWork’s business model and Mr Neumann’s flouting of corporate governance norms, enabled in part by JPMorgan. Along with other advisers including Goldman Sachs, JPMorgan’s own reputation risks being tainted by the unfolding crisis.

According to pitch books reviewed by the Financial Times and interviews with people briefed on the process, IPO bankers dangled potential valuations even higher than the $47bn price tag Mr Son’s last investment put on the company.

JPMorgan told WeWork executives the company could be worth between $46bn and $63bn in the listing. Goldman pegged the equity at between $61bn and $96bn. Morgan Stanley estimated WeWork’s valuation at between $43bn and $104bn in a presentation in 2018, though a pitch for the IPO set it at a more modest $18bn-$52bn. Michael Grimes, Morgan Stanley’s top tech banker, made an impassioned pitch to Mr Neumann, but the investment bank ultimately declined to work on the offering when it lost out on the lead role.

If JPMorgan’s institutional investors were throwing up all over this, they should have known

As WeWork prepped for its flotation, there were clear signals from public investors that they were not willing to bankroll lossmaking unicorns at any price. Shares of the ride-hailing pioneer Uber, another SoftBank investment, have slid precipitously since its stock market listing this year. WeWork pulled its IPO earlier this month after failing to find enthusiasm at a valuation as low as $15bn.

David Spreng, founder of a Silicon Valley lender called Runway Growth Capital, questioned why WeWork’s underwriters had not identified investor concerns sooner in the process. “That is their job,” he said: “Today, there’s a lot of pre-marketing [of IPOs]. If JPMorgan’s institutional investors were throwing up all over this, they should have known.”

More than $100m in fees are riding on the IPO, to be split among 31 banks, and the listing was just one in what many bankers hoped would be a series of lucrative mandates. JPMorgan was poised to earn $50m structuring a $6bn loan lent by it and a group of banks including Goldman, Bank of America, Citigroup, UBS and Wells Fargo, for example. While several big banks have already earned millions of dollars in fees from WeWork.

WeWork’s parent company, the We Company, has said it still plans to list its shares this year. People briefed on the matter, however, said it was increasingly likely any listing could slip to 2020 or even beyond.

While many big banks have already earned millions of dollars in fees from WeWork, none is as entwined with the company and its co-founder as JPMorgan. It led a $1.2bn credit line for the company in 2015, was the lead underwriter on its $702m corporate debt sale last year and has extended part of a $500m personal loan to Mr Neumann along with UBS and Credit Suisse. It has been the bank of choice for Mr Neumann when he has taken out mortgages to finance his own property purchases — including deals, now unwound, that attracted conflict of interest questions because he took stakes in buildings that were leased to WeWork.

In August JPMorgan said it had lent Mr Neumann a further $97.5m. The bank’s asset management arm has also invested directly in WeWork.

The WeWork relationship had been seen as critical to JPMorgan’s hopes of supplanting Goldman Sachs and Morgan Stanley’s dominance in investment banking for technology companies. The concerted effort to court WeWork executives was led by the bank’s vice-chairman Noah Wintroub, who first met Mr Neumann when the company opened its first building in Manhattan in 2010. He has even gone so far as to follow up when the WeWork chief executive complained about his Chase bank account, Mr Wintroub told the FT in January. Goldman Sachs also worked to embed itself in Mr Neumann’s financial life. Chief executive David Solomon visited WeWork’s Chelsea headquarters this year — “to kiss the ring”, as one former WeWork executive put it — after taking over from Lloyd Blankfein. The daily tending of the relationship fell to Goldman partner Kim Posnett, global head of internet investment banking, as well as Dan Dees and David Ludwig.

Like JPMorgan, Goldman invested directly in WeWork in venture funding rounds dating back to at least 2014, according to data provider PitchBook. And Mr Neumann gave the keynote speech at a charity event honouring Mr Solomon late last year, an event that Mr Blankfein also attended.

Throughout the IPO process, Mr Neumann and his executive team at WeWork — including co-presidents Artie Minson and Jennifer Berrent and general counsel Jared DeMatteis — have leaned on the law firm Skadden, Arps, Slate, Meagher & Flom for guidance. Skadden partner Ryan Dzierniejko, who has worked on listings including Match Group, Markit and Shopify, helped to restructure the company to provide tax advantages to its early investors and helped to navigate concerns raised by the Securities and Exchange Commission over some of the more unusual financial metrics WeWork planned to include in its prospectus.

While the imbroglio puts the reputations of JPMorgan and the other advisers in the spotlight, the next chapter probably involves more advisers, not fewer. Already two top crisis communications groups have been brought in to work with Gladstone Place Partners, WeWork’s original public relations firm for the IPO: Sard Verbinnen, which represents SoftBank, has been hired by WeWork, as has Edelman.

In a 2009 sketch of their start-up’s ambitions, Mr Neumann and his co-founder Miguel McKelvey envisaged running Caribbean chartered yachts, a luxury hotel chain and a “WeBank” that would provide “first-class financial services” to the entrepreneurs that use its office space. A decade later, WeWork’s banking arm — and the yacht business — has failed to materialise and Mr Neumann, pushed out into a non-executive chairman role, is left pondering whether his own advisers have provided the first class services he was hoping.