The supervisory board of the German conglomerate ThyssenKrupp has moved to dismiss the struggling firm’s chief executive, Guido Kerkhoff, after just 14 months in the job.

Mr Kerkhoff was originally handed a five-year mandate to restructure the steel-to-submarines group, but has come under increasing pressure after attempts to merge with Tata of India were blocked by Brussels, and a plan to split ThyssenKrupp into two was shelved.

If the decision is voted through in an upcoming board meeting, former Bosch vice-president and current chair of the supervisory board Martina Merz will take the helm for up to 12 months. She will oversee the sale or partial IPO of the group’s prized elevator unit, which is due in the 2019-20 fiscal year.

The unit has attracted interest from private equity groups, as well as Finnish rival Kone, and could fetch more than $20bn, which analysts calculate to be more than the combined value of the remaining parts of ThyssenKrupp.

Unlike Mr Kerkhoff, who has been at the firm for 8 years, Ms Merz, who joined last year, is seen as a more objective outsider, who could accelerate the dismantling of the company. If appointed, she would become one of the first women to lead a large German firm. 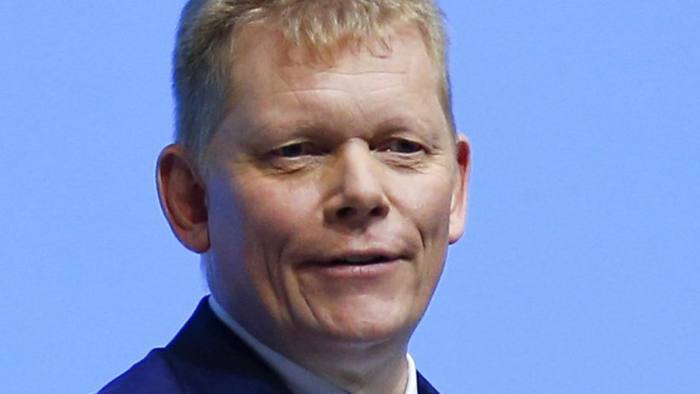 Mr Kerkhoff, a former chief financial officer at ThyssenKrupp, was made interim CEO after the unexpected departure of Heinrich Hiesinger last year, and the subsequent resignation of chairman Ulrich Lehner. Their exits came amid pressure from activist investors, including Cevian Capital and Elliot.

Earlier this month, ThyssenKrupp was relegated from Germany’s flagship Dax index, of which it was a founding member, following steep declines in its share price, exacerbated by successive profit warnings. The company’s fiscal year ends on 30 September, with annual results due next month.

Mr Kerkhoff’s severance package, which is likely to be substantial, has yet to be negotiated.

Ms Merz will be temporarily succeeded as chairman of the supervisory board by Siegfried Russwurm, a former engineer and Siemens manager. Klaus Keysberg, a longstanding ThyssenKrupp manager and CEO of the company’s materials business, will also join the executive board, under the current recommendations.

The announcement of Ms Merz’s potential appointment as ThyssenKrupp CEO comes just a day after another company at which she is a board member, commercial vehicle components maker SAF-Holland, issued a profit warning which prompted a 24% drop in its share price.