Donald Trump became the fourth US president to face impeachment proceedings after Democratic House Speaker Nancy Pelosi accused him of betraying his oath of office and US national security by seeking a foreign power’s help in the 2020 election.

In a televised address, Ms Pelosi said the House would look at allegations that Mr Trump pressed his Ukrainian counterpart to investigate local business activities of the son of Joe Biden, the former vice-president who is one of the front-runners in the race for the 2020 Democratic nomination for president.

The impeachment inquiry is the first since the House impeached Bill Clinton in 1998 and the move was announced by Ms Pelosi only hours after the president sought to blunt rising Democratic criticism by promising to release a transcript of his controversial July 25 telephone call with the Ukrainian president, Volodymyr Zelensky.

“The president must be held accountable. Nobody is above the law,” Ms Pelosi said. “The actions of the Trump presidency revealed . . . the president’s betrayal of his oath of office, betrayal of our national security and betrayal of the integrity of our election.”

Mr Trump, who was in New York to address the UN General Assembly, slammed the move on Twitter: “Such an important day at the United Nations, so much work and so much success, and the Democrats purposely had to ruin and demean it with more breaking news Witch Hunt garbage. So bad for our Country!”

The scandal erupted after a still-unidentified whistleblower raised concerns about conversations that Mr Trump held with a foreign leader, later revealed to be Mr Zelensky. The head of the US intelligence community has refused to give Congress the whistleblower’s complaint, which Ms Pelosi said was a “violation” of US law.

The actions of the Trump presidency revealed . . . the president’s betrayal of his oath of office, betrayal of our national security and betrayal of the integrity of our election

Mr Trump has acknowledged speaking to Mr Zelensky about the Bidens. He also confirmed on Tuesday that he had personally decided to withhold nearly $400m of military aid to Ukraine before making the call to the Ukrainian president.

But Mr Trump has denied he was trying to pressure Mr Zelensky. He said his motivation was to encourage European countries to pay their fair share of Ukraine’s costs in its battle against the Russian incursion in the eastern part of the country.

Mr Trump described the transcript of his call with Mr Zelensky as “perfect” and said it would prove he did not pressure his counterpart to interfere in US politics. One US official said the transcript would be a “verbatim” account of the conversation and would show that the Democrats had “over-reached” with the impeachment inquiry.

Mr Trump on Tuesday evening said Mike Pompeo, the US secretary of state, had received permission from Ukraine to release the transcript. 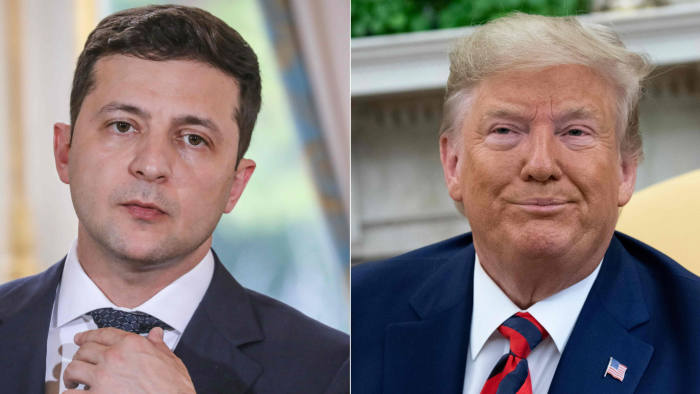 However, in addition to the transcript, Democrats are also demanding a copy of the whistleblower’s complaint as suggestions arose that it could point to a pattern of problematic calls, beyond the one conversation in July. One Democratic lawmaker said the party would not be able to determine exactly what Mr Trump had done unless it received access to the full complaint.

Adam Schiff, the Democratic head of the House intelligence committee, said earlier on Tuesday that the whistleblower had conveyed to the committee a desire to talk to lawmakers. He said the whistleblower’s lawyer was discussing the situation with the office of Joseph Maguire, the acting head of US national intelligence.

Mr Maguire, who refused to provide Congress with the complaint, is due to appear before the House intelligence committee on Thursday. Ms Pelosi stressed that he would be in violation of US law if he did not hand over a copy of the complaint from the whistleblower.

“At that time, he must turn over the whistleblowers full complaint to the committee,” Ms Pelosi said. “It will have to choose whether to break the law or honour his responsibility to the constitution.”

Ms Pelosi had long resisted calls from Democratic House members to impeach Mr Trump because she thought the Republican-controlled Senate would be unlikely to convict him. She also worried that it would energise his voters, increasing his chances of re-election and endangering a number of freshmen Democrats who were elected last year in Republican-leaning districts to give the Democrats their House majority.

The California lawmaker has shifted her stance under pressure from members of her caucus who said the charges against Mr Trump were too serious to ignore. Her concerns about freshman Democrats also became partly moot after a number of the new lawmakers penned an op-ed in the Washington Post to call for impeachment.

One of the most prominent House Democrat freshman, Alexandria Ocasio-Cortez, told reporters on Tuesday that she thought the articles of impeachment could include several charges, including that Mr Trump had accepted assistance and favours from foreign governments.

Brendan Boyle, a three-term House Democrat from Philadelphia, told the Financial Times that it was a “watershed” moment. “We all are mindful of the gravity of this.”

The inquiry was immediately lambasted by some Republicans who joined with Mr Trump in calling it a witch hunt. Mitch McConnell, the Republican Senate majority leader, said the move was another Democratic effort “to reverse their 2016 election defeat”.

“The result has been a two-and-a-half-year impeachment parade in search of a rationale,” Mr McConnell said. “When investigations by Special Counsel [Robert] Mueller and the Senate Select Committee on Intelligence deflated their breathless accusations of a campaign conspiracy with Russia, Democrats have simply shifted to new arguments for their pre-determined conclusion.”

Mr Trump’s re-election campaign manager, Brad Parscale, said that the inquiry would help the president keep the White House in 2020.

“The misguided Democrat impeachment strategy is meant to appease their rabid, extreme, leftist base, but will only serve to embolden and energise President Trump’s supporters and create a landslide victory,” he said.

Additional reporting by Aime Williams and Kiran Stacey in Washington