Stocks fell because of the uncertainty created by news that House Speaker Nancy Pelosi will announce a formal impeachment inquiry of President Donald Trump. Pelosi’s announcement comes after Trump held a call earlier this year with Ukrainian President Volodymyr Zelensky in which he allegedly pressured him to investigate Democratic presidential hopeful Joe Biden’s family. Stocks have surged since Trump was elected as his administration implemented business-friendly policies, such as lower corporate taxes. However, investors worry the political turmoil surrounding impeachment proceedings could weigh on an already fragile economy. Tough talk on U.S.-China trade from Trump also hit stocks. Trump said at the United Nations General Assembly that he would not accept a “bad deal” from China in upcoming negotiations. 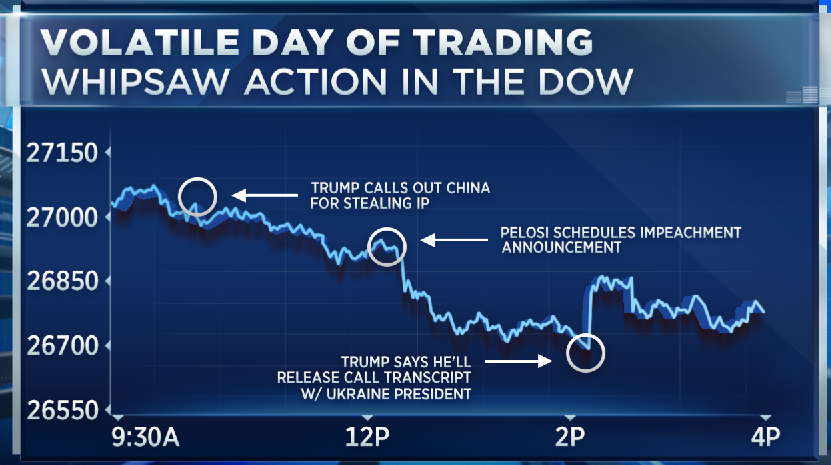 Netflix was among the worst-performing stocks in the S&P 500, dropping about 4.3% amid worries over the company’s upcoming quarterly results. Research firm Pivotal Research slashed its price target on the stock all the way to $350 per share from $515, citing increased streaming competition. Bank shares also fell broadly on concerns about the slowing economy. Citigroup and Bank of America both dropped about 2% while J.P. Morgan Chase slid over 1.3%.

Wall Street will keep its eyes glued on Washington for any more clues on Trump’s impeachment inquiry. Investors will also pore through housing data in the form of weekly mortgage applications and monthly home sales. Read more about Wednesday here.