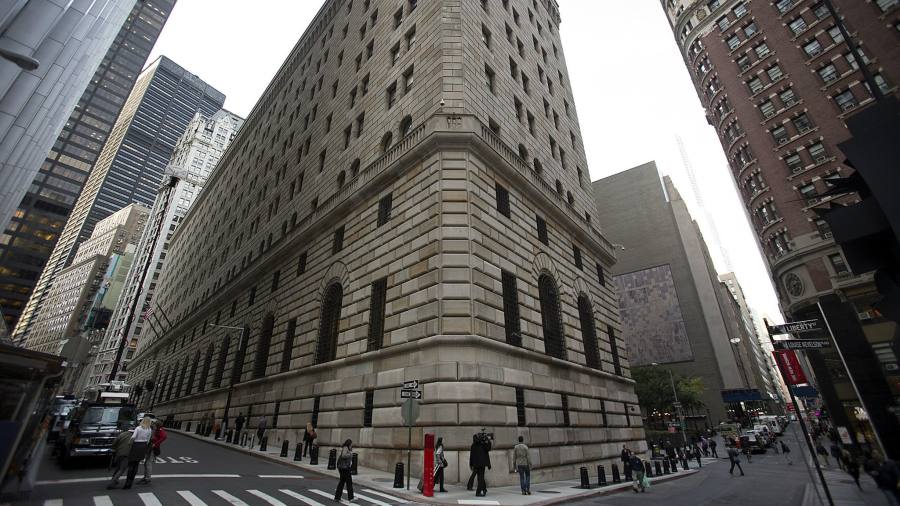 Banks requested more than double the $30bn of two-week loans on offer from the Federal Reserve Bank of New York on Tuesday, as they sought to shore up short-term financing ahead of the end of the third quarter.

Tuesday’s offering was the first of three term repurchase agreement, or repo, operations to be conducted by the markets arm of the US central bank this week.

The New York Fed stepped into repo markets, where banks and investors source cash in exchange for Treasuries to cover short-term term funding needs, for the first time in a decade last week after a dramatic rise in the cost of borrowing money overnight.

On Friday it announced it would inject a further $90bn in three $30bn two-week repo operations this week, enabling banks to borrow cash and tide them over the end of the third quarter. The action is an attempt to alleviate potential pressure in short-term financing markets at a time when banks typically step back from lending in the market because they trim their balance sheets ahead of the quarter-end reporting date.

Demand at Tuesday’s repo operation totalled $62bn for the $30bn on offer. The auction works by banks submitting bids for cash to the New York Fed at a minimum interest rate of 1.85 per cent. The average interest rate at the auction was 1.96 per cent, with a high of 2.05 per cent.

That suggested banks were willing to pay up to borrow the cash, said Priya Misra, head of global rates strategy at TD Securities. “Twice over subscribed and the rate is high,” she said. “We knew there was going to be quarter-end pressure and this is reflective that there would be stress. The term-repo from the New York Fed is helping.”

The past week’s volatility has caused problems for the implementation of the Federal Reserve’s monetary policy and highlighted some of the effects of unwinding its unprecedented post financial crisis interventions in financial markets. It has also opened up questions on how crucial short-term lending markets will operate in the future.

The New York Fed’s decision to step in before stress took hold at the end of the month has been welcomed by analysts and traders.

Mark Cabana, an interest rate strategist at Bank of America Merrill Lynch called the latest action by the New York Fed a “big bazooka that signals to the market that the Fed wants this fixed”.

The New York Fed will conduct more term-repo operations this week on Thursday and Friday. The end of the third quarter is being watched by market participants as indicative of what might happen at year end, when borrowing cash short-term can be even more constrained.

“Either people just want to make sure they have financing and that is why [the first auction] is oversubscribed,” said Ms Misra. “Or there is more underlying stress to come. They might need to do a larger size term operation for year end.”