As the final Thomas Cook flight touched down in Manchester on Monday morning, a bitter blame game erupted as to who was responsible for the collapse of the world’s oldest travel group.

Banks, bondholders, management and the group’s largest shareholder, China’s Fosun, all came in for criticism.

Prime Minister Boris Johnson reflected on “whether the directors of these companies are properly incentivised to sort these matters out”.

Interviews with bankers, investors, bondholders and advisers for the restructuring showed that there was a serious effort — and several alternative schemes — to save the business in its last months.

“No one wanted to be the first to walk away and shoulder the blame,” said one person close to Thomas Cook. “But every time there was a solution, it seems like someone would raise the bar that much higher.”

In August, the business plan put forward by Thomas Cook’s management as part of a £900m rescue deal was reviewed by financial advisers from FTI Consulting, who concluded an additional £200m back-up loan was needed to ensure the business carried on trading through its winter season when cash is most strained. 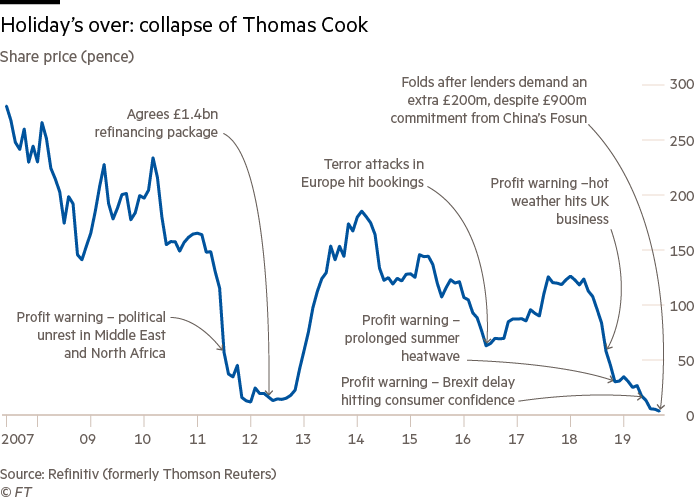 “The company had said that they were going to go away and come up with a plan to secure this extra £200m in August but they appeared to ignore it for quite some time,” said someone close to the banks.

Nonetheless at the end of August, all parties signed up to the terms of a £900m recapitalisation plan.

In mid-September, Thomas Cook’s syndicate of 17 lenders forced the issue when they demanded the loan in “standby” equity from the travel group’s largest shareholder, the Chinese conglomerate Fosun.

The investor, already committing £450m to the agreed recapitalisation, baulked at the request — and a frantic two-week search for equity ensued even as Thomas Cook faced widespread panic among customers and suppliers that drained its cash.

An email dated September 13, shared with the Financial Times, said Fosun was “getting nervous” but was still intent on investing its £450m.

By then, though, media coverage was sowing doubt in suppliers’ and customers’ minds and narrowing the range of options. 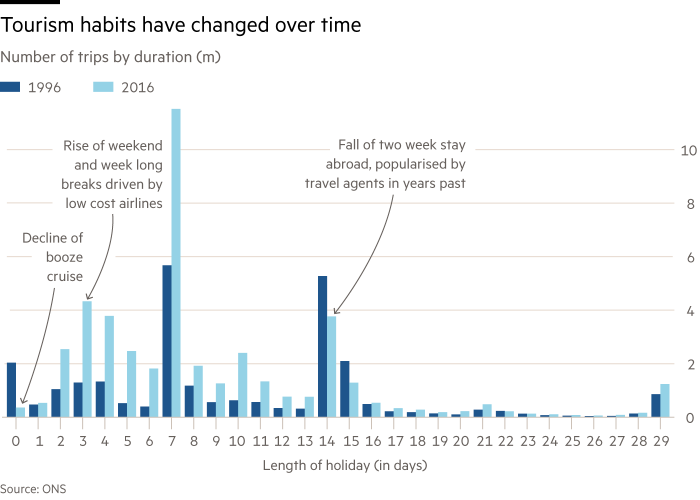 Sources on all sides of the negotiations said that both Fosun and the banks seemed to be looking for a way out of the deal, but also without wanting to become the scapegoat for its demise.

Thomas Cook’s problems can be traced back to 2007 when, under the leadership of the Spanish-British businessman Manny Fontenla-Novoa, it merged with the UK holiday company MyTravel, a hotchpotch of businesses formed through mergers that brought with it a tour operator and aircraft.

Until then Thomas Cook had been solely a retail operation — selling pre-packaged package holidays from other suppliers and taking none of the risk.

The MyTravel acquisition weighed heavily on the balance sheet. At its interim results in May this year Thomas Cook wrote down a final £1.1bn of goodwill from that deal, at the same time as revealing a debt pile of £1.2bn. 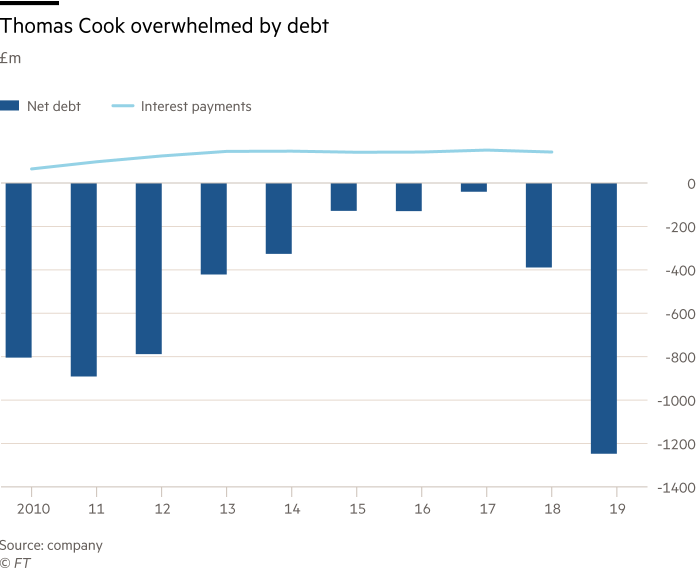 According to one former executive, Mr Fontenla-Novoa’s second mistake was to merge with the Co-operative Travel in 2010, lumbering the business with a retail estate of more than 1,400 high street shops at a time when consumers had started to book holidays online. That year Mr Fontela-Novoa earned £1.2m in bonuses.

His successor Harriet Green, brought in to slash costs after Thomas Cook reached near collapse in 2011, described the company’s debt as a “cancer”. The same former executive said that when Ms Green referred to helping Thomas Cook into remission she meant “getting the banks off Thomas Cook’s back”.

A Turkish businessman who bought an 8 per cent stake in Thomas Cook less than two months ago, said in a statement to the Turkish website turizmguncel.com that he had known Thomas Cook was badly run, but added: “I didn’t know it was this badly run. You cannot make so many mistakes, one after the other.”

To service the debt alone — at an annual cost of some £170m since 2012 — the company had to send 3m customers on holiday each year.

As debt — and bad press — mounted up, customers began to lose faith in the brand that had once sent Winston Churchill and Oscar Wilde on holiday.

Despite the mounting problems, management held out hope until the end. Talks to sell its Nordic business to Triton lasted until a few days ago and a last-minute deal was agreed for a group of Spanish hoteliers to inject up to £100m of equity in an attempt to save the business for the hordes of German and British holidaymakers that migrate to the Costas every summer. 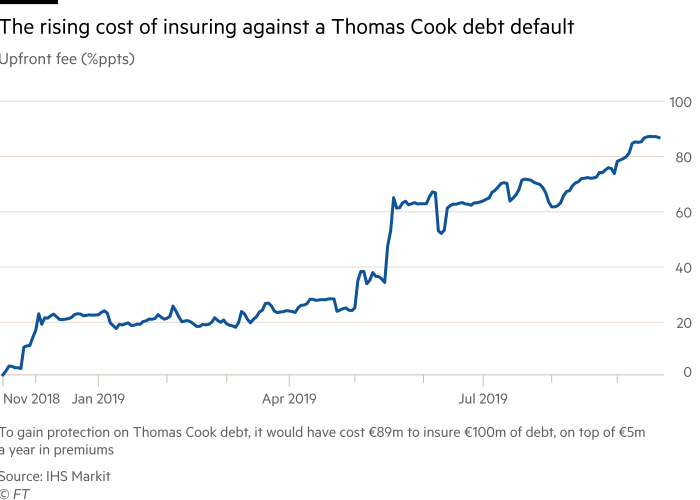 But Sunday’s meeting ended without agreement. The last hope was that the UK government would step in, but when that failed to materialise, one person said of the lenders’ position: “The conclusion was that if the government was not there then nor are we.”

A person with knowledge of the liquidation said that the insolvency was not being run as an administration because of Thomas Cook’s lack of valuable assets. Aside from its airport slots, even the profitable air fleet holds little promise: “There’s no value in the Thomas Cook airline without the Thomas Cook business,” he said.

Fosun, which said on Monday that it would “continue to increase investment and co-operation in the UK market”, has a joint venture with Thomas Cook in China and may return to buy the brand, according to the person.

Thomas Cook India, which was sold in 2012, was due to lose rights to the brand in 2024 but now is exploring purchasing it outright. “There’s an opportunity for us to evaluate keeping the Thomas Cook brand in perpetuity,” said Abraham Alapatt, head of marketing.

But whatever is extracted in the fire sale, there are still questions over the future value of the Thomas Cook — or even the concept of the package holiday. Bernstein analyst Richard Clarke said: “If you want to go on holiday, you have to take on some risk these days.”

Amid the wreckage of Thomas Cook, there is at least one clear winner: the hedge funds that bought credit-default swaps that will pay out after the travel agent’s liquidation, writes Robert Smith.

CDS are derivatives that behave like insurance contracts, protecting holders against the risk a company does not repay its debts. They are not legally classed as insurance, allowing them to be freely traded by institutions with no exposure to the debt concerned.

Buyers and sellers are typically traders at hedge funds and banks. Those who sold swaps should now have to pay out to those who bought default protection.

There were $250m of CDS bets on Thomas Cook’s outstanding debt in mid-August, according to data from the International Swaps and Derivatives Association. This is a “net notional” figure that in simple terms reflects the total amount sellers could transfer to buyers in the event of a payout.

The fact that some bondholders also owned CDS added complexity to the restructuring. The lack of clarity on whether the proposed restructuring would trigger payouts on the CDS had led a group of bondholders to threaten to block a deal. That the situation unravelled so fast meant hedge funds did not have chance to veto a rescue to guarantee payouts on their swaps.

Still, the motivations of different CDS holders will probably be closely examined. There will also be renewed scrutiny of the difficulties these derivatives can add to debt restructurings.