The Federal Reserve Bank of New York announced plans to inject another $75bn into the US financial system when trading resumes on Wednesday, a day after making its first such intervention in more than a decade to alleviate funding pressures in short-term lending markets.

The cost of borrowing cash overnight via repurchasing agreements, known as repos, surged on Tuesday morning to as high as 10 per cent, a more than fourfold increase from Monday morning, according to Refinitiv data.

A senior executive at a large US bank said the sharp rise in the so-called repo rate, reflected a “pretty sizeable dislocation between funding needs and funding” in a key portion of the US money market.

Repos are vital to the financial system because they give companies access to cash overnight using US Treasuries as collateral. Ashish Shah, co-chief investment officer for fixed income at Goldman Sachs Asset Management, described the abrupt tightening of the US money market as a “big deal”.

“When things like this happen it increases the uncertainty and leaves fixed income markets jittery. And that is the job of central banks to avoid

“When things like this happen it increases the uncertainty and leaves fixed-income markets jittery. And that is the job of central banks to avoid,” he said.

The sharp rise in the repo rate created a predicament for the Fed just as top policymakers were meeting in Washington to make a decision on monetary policy because it pushed up the central bank’s benchmark interest rate. The so-called federal funds rate rose to 2.25 per cent, the very top of the range the central bank targets, from 2.14 per cent at the end of last week.

In response, the New York Fed, which conducts market operations for the central bank, launched an operation to “help maintain the federal funds rate within the target range”. 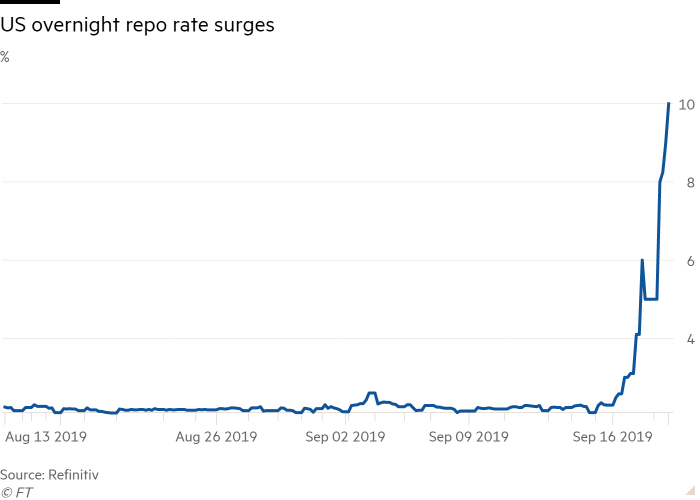 The New York Fed made up to $75bn available through a repo auction in which the Fed accepts Treasuries and other securities as collateral, and in exchange, provides cash. The facility had not previously been used at such a scale since 2008.

The bank had to cancel the operation on the first attempt due to “technical issues”. On the second effort, primary dealers — big banks that act as trading counterparties of the Fed — tapped the facility for $53bn.

The operation appeared to have succeeded in calming the money markets. The repo rate tumbled soon after the New York Fed announced its action.

The New York Fed said on Tuesday afternoon that it would repeat the operation on Wednesday morning during a 15-minute window before 8:30am, again offering to inject up to $75bn into financial market.

Bank executives and analysts said several factors were behind the abrupt rise in the repo rate. Lenders’ reserves above legally required amounts have been declining since the Fed ended its bond-buying programme in 2014, reducing the amount of cash they are willing to lend through repo operations. 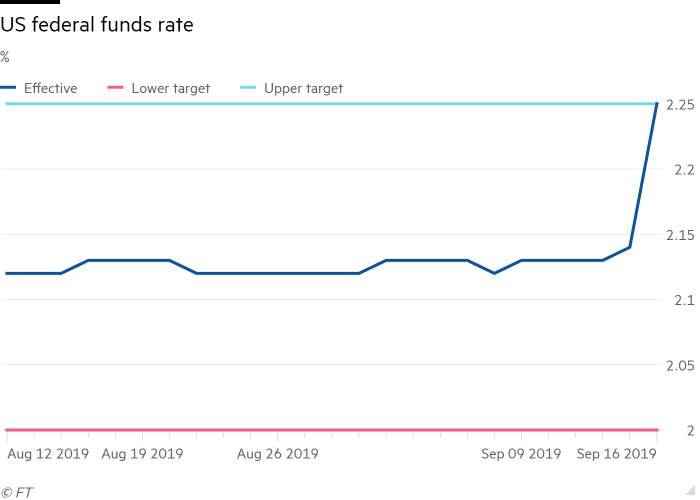 The system came under additional stress in recent days as companies pulled cash out to pay tax bills. More cash left the system as investors settled Treasury purchases after a flurry of recent issuance.

We think that the culprit is the scarcity of bank reserves, which are the only asset that provides banks with intraday liquidity

“We think that the culprit is the scarcity of bank reserves, which are the only asset that provides banks with intraday liquidity,” said TD Securities. “Reserves have been declining since 2014 and we expect them to decline further as Treasury’s cash balance increases and currency in circulation grows.”

A senior executive in the repo operation of a big US bank added that the recent issues were not the same as the causes of spikes in overnight lending rates during the financial crisis. “This is a money markets phenomenon — not something that has to do with perceptions of credit quality at banks or anywhere else,” he said.

The FT is free to read today. You can share this article using the buttons at the top.