Protesters are set to take to the streets of Hong Kong again on Sunday, a day after the government suspended its extradition bill but balked at withdrawing the controversial proposal.

Carrie Lam, Hong Kong’s chief executive, said she would mothball the proposal on Saturday, following protests that saw hundreds of thousands of people take to the streets and which drew international condemnation from lawyers, businesses and the US government.

“We have no intention to set a deadline for this work and promise to report to and consult members of the Legislative Council Panel on Security before we decide on the next step forward,” she told reporters.

Opposition to the proposed bill, which critics claim would allow anyone passing through the territory to be taken across the border to stand trial in mainland China on potentially trumped-up charges, resulted in violent clashes on the streets of Asia’s leading financial centre.

Ms Lam emphasised she had suspended rather than withdrawn the bill, arguing the amendment was well intended but had been poorly communicated to the people of Hong Kong.

Protest organisers said Sunday’s march would still go ahead as they wanted a complete withdrawal of the legislation and for Ms Lam to step down.

Flyers advertising the event were being sent to iPhones on Sunday morning, using the airdrop function at major thoroughfares and subway hubs including Central and Tsim Sha Tsui.

Online posts gave packing recommendations — water, masks and energy bars — and encouraged marchers to bring flowers and paper cranes to mark the spot where a man fell to his death on Saturday while protesting the bill.

“We are very discontented about the indifference, ignorance and arrogance of Carrie Lam’s government,” said Bonnie Leung of Civil Human Rights Front, the protest’s organisers. She also condemned Ms Lam’s failure to apologise for the police brutality in Wednesday’s protests.

At least 94 people were injured in on Wednesday when central Hong Kong was brought to a standstill as police and protesters clashed. Police used an estimated 150 rounds of tear gas, 20 bean bag rounds, several rubber bullets and batons against protesters

Police commissioner Lo Wai-chung said the police acted in self-defence after protesters, armed with metal poles and wooden boards, threw bricks at them.

Eleven protesters were arrested for illegal assembly, assault and rioting. Ms Lam, who has declined to apologise for her handling of the extradition bill debacle, defended the police at the press conference on Saturday.

She said her decision to suspend the bill was prompted by Wednesday’s violence, rather than because of the biggest protest in 30 years last Sunday when an estimated 1m people — roughly one in seven of the population — marched through the streets to oppose the extradition bill.

Ms Lam made it clear that the extradition bill would be reintroduced when the time was right but it would be unlikely to be this year. “We will pause and think and, for the time being, suspend [the bill],” she said.

Ms Lam, who has repeatedly denied Beijing ordered her to push through the extradition law, said she had asked for and received the support of Beijing to indefinitely postpone the bill.

Beijing’s Hong Kong and Macau Affairs Office said it “supported, respected and understood” the decision and would continue to back Ms Lam and her government. 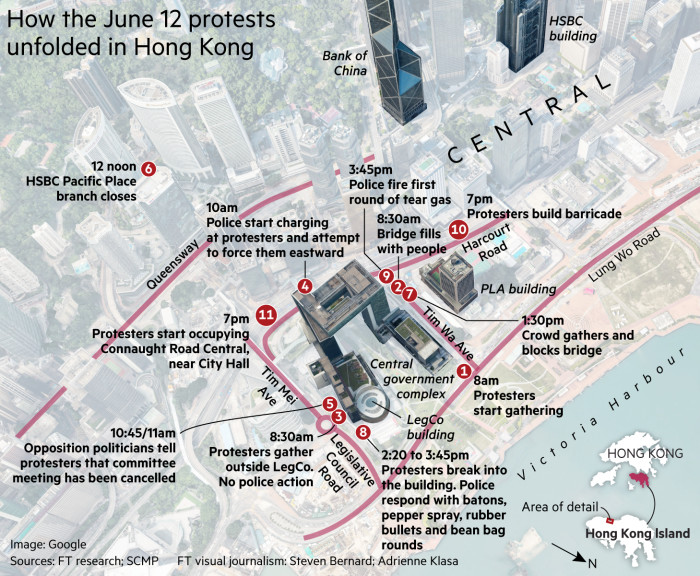 “The central government is paying close attention to the recent anti-extradition law protests in Hong Kong as well as reactions in Hong Kong society,” it said.

Chinese vice-premier Han Zheng and other Beijing officials who oversee Hong Kong’s affairs held meetings in Shenzhen, the mainland Chinese city which borders the former British colony, to better understand the situation in Hong Kong and find a way out of the deadlock, two people familiar with the matter told the FT. When asked at Saturday’s press conference whether she had met Mr Han, Ms Lam evaded the question.

Ms Lam had vowed to push ahead with the original timetable for the bill on Monday. But since then the backlash — from lawyers and businesses as well as the US and other foreign governments — had intensified.

Hong Kong’s General Chamber of Commerce, which says its members employ one-third of the territory’s workforce, applauded the decision to suspend debate of the bill.

“We welcome the government’s decision to suspend resumption of the second reading of the extradition bill, which will allow things to cool down and let everyone return to rational debate,” said Aron Harilela, the chamber’s chairman.

Others were less swayed. “Carrie Lam has lost credibility among the Hong Kong people,” said pro-democracy lawmaker Claudia Mo. “She must step down.”