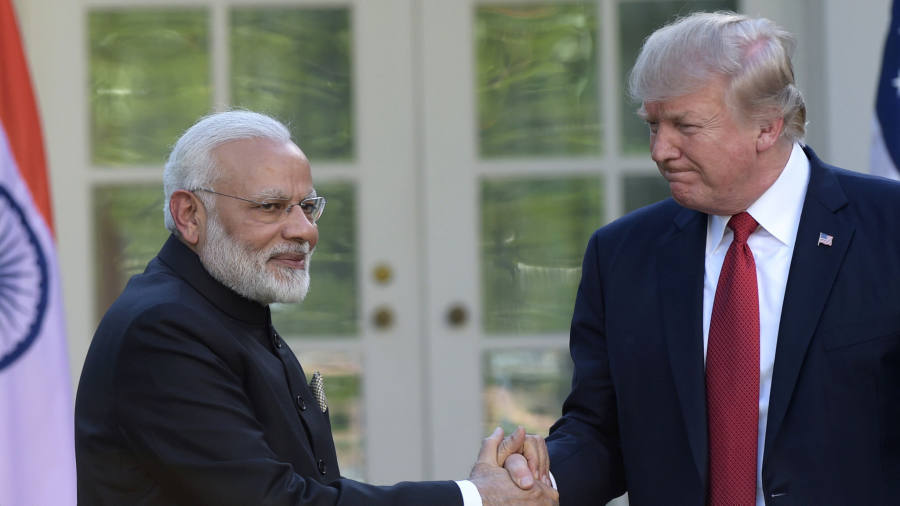 India is raising tariffs on US goods in retaliation for Washington’s decision to strip New Delhi of preferential access to the American market.

The increase in tariffs on a range of goods, including almonds, apples, and walnuts, would take effect on June 16, the commerce ministry said.

The trade spat has cast a shadow over the deepening India-US security relationship, designed to counter China’s economic and military influence in the region.

US secretary of state Mike Pompeo is scheduled to hold talks with his Indian counterpart Subrahmanyam Jaishankar ahead of the G20 summit in Japan later this month, where Mr Trump and Narendra Modi are expected to meet.

US-India bilateral trade reached $142bn in 2018, a seven-fold increase since 2001, according to the US State Department. But US president Donald Trump has repeatedly criticised India’s protectionist policies, describing its tariffs on goods such as Harley-Davidson motorcycles as unfair.

New Delhi’s loss of privileges under Washington’s generalised system of preferences — a programme to aid the economies of less developed countries — will hit around $6bn worth of Indian goods previously imported into the US duty-free.

India’s commerce ministry has called the US decision “unfortunate” and said it had wanted to find a “mutually acceptable way forward”. New Delhi proposed higher tariffs last year following the US announcement that it would not grant India a waiver when it increased its steel and aluminium tariffs, but decided not to do so.

India’s recent efforts to regulate ecommerce titans Amazon and Walmart-owned Flipkart have aggravated tension, with US companies complaining that they were surprised by the new rules.

There is also tension over the Trump administration’s threat to impose sanctions on India if it purchases oil from Iran and if it proceeds with its planned acquisition of Russian S-400 anti-aircraft missiles.

Earlier this week Mr Pompeo appeared open to discussing India’s preferential trade status. “We’ll probably discuss the recent decision on the GSP program,” Mr Pompeo said, adding that he hoped “India will drop their trade barriers and trust in the competitiveness of their own companies, their own businesses, their own people, and private sector companies.”

C Raja Mohan, director of the Institute of South Asian Studies at the National University of Singapore said it was now a question of finding the middle ground.

“If you are a pessimist, this is the beginning of a trade war between India and the US,” he said. “If you are an optimist, India’s tariff retaliation sets the stage for a serious negotiation between Delhi and Washington on trade issues and a new framework to transform the commercial partnership and reinforce the security ties.

“Pompeo’s talk in Delhi and Modi’s visit to the Osaka G20 should tell us who might prevail: pessimists or optimists.”