When Jay Powell stepped up to the podium at the Federal Reserve Bank of Chicago earlier this month, he delivered what in Fed-speak amounted to a thunderbolt. Talking about the impact of “trade negotiations” between the US and China, the Fed chairman said: “We are closely monitoring the implications of these developments for the US economic outlook and, as always, we will act as appropriate to sustain the expansion.”

After the Fed spent the past three-and-a-half years normalising interest rates after the vast monetary stimulus of the post-crisis decade, Mr Powell, who has been in the job since last February, was pointing to a possible reverse of course.

The implicit admission that interest rates could be cut set the scene for a particularly meaningful Fed meeting next Tuesday and Wednesday, during which officials will have to weigh the impact of the trade war with China on the US economy, and guide the markets towards their next move. Investors have been increasingly betting that Mr Powell would press ahead with a rate cut this year, although expectations of a swift move ebbed on Friday on better economic news in the retail sector.

While the US economy is still growing at a relatively strong pace, with unemployment at record lows, Donald Trump’s escalating trade wars have heightened concerns about a looming downturn. The Fed is trying to guess how far the stand-off between the US and China — and Mr Trump’s other aggressive trade actions including threatened tariffs on Mexico — will spill over into the wider economy.

Further complicating the Fed’s calculations are the frequent attacks by Mr Trump on the central bank and regular appeals to keep the economy well juiced as he heads into his 2020 re-election campaign. 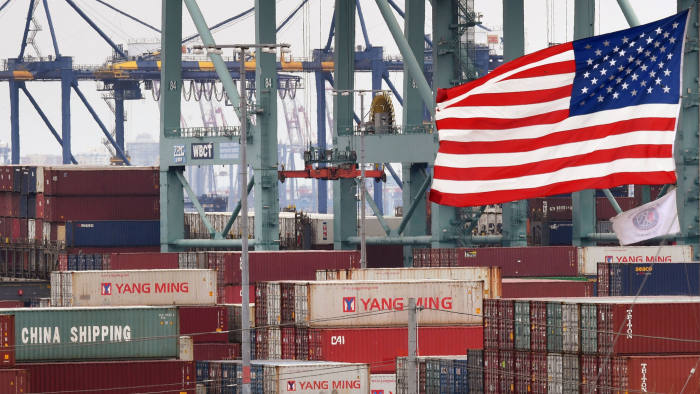 Chinese shipping containers in Long Beach, California. The US Federal Reserve is closely monitoring the impact of the ongoing trade dispute between the US and China © AFP

“They made a big mistake. They raised interest rates far too fast,” Mr Trump told CNBC on Monday in one of his sharpest diatribes yet about the Fed. “It’s more than just Jay Powell. We have people on the Fed that really weren’t — you know, they’re not my people.”

If the Fed were to cut rates, it “would be an insurance policy to keep ahead of the significant dislocation from the trade wars”, says Sarah Bloom Raskin, a former Fed governor and deputy treasury secretary under Barack Obama and now a professor at Duke University. “But . . . if they leave markets and people in the economy with the idea that they caved to White House pressure, they really run the risk of harming their credibility.”

With all of these countervailing forces at play, most economists are now expecting the US central bank to keep interest rates on hold next week, though they could modify the language in their statement to highlight the risks to the outlook from the trade war and shifts in economic data. However, Fed officials will offer a major indication of whether they intend to ease policy later in the year — as early as July — in the economic projections they release alongside their policy statement after the meeting. The forecasts include a so-called “dot plot” graphic that maps Fed officials’ individual interest rate expectations. 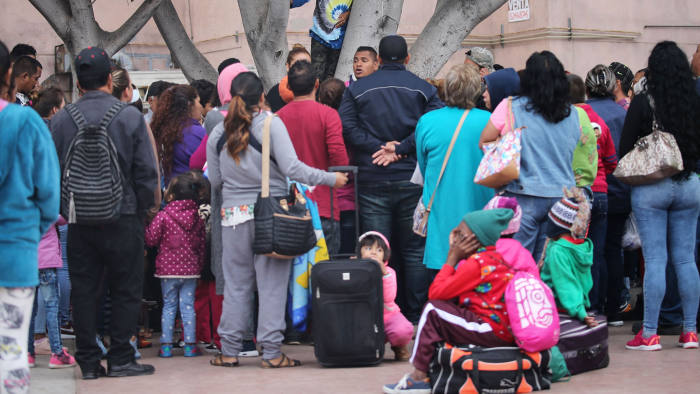 Undocumented migrants await US asylum hearings in Tijuana, Mexico. The Trump administration has threatened to impose tariffs on Mexico for failing to curb immigration © Getty

“The dot plot doesn’t give them a lot of room for ambiguity,” says David Wessel, director of the Hutchins Center on Fiscal and Monetary Policy at the Brookings Institution in Washington. “People will look at the dots and the dots will either show a rate cut or they won’t. Either way [Mr Powell] will have to explain that.”

A move towards monetary easing in the coming months would be particularly striking because just a year ago, after Mr Powell took office, the Fed had been proceeding comfortably with a series of interest rate rises to fully normalise policy in the hope it would give it more breathing room to tackle the next downturn.

Rates had fallen to near zero after the financial crisis, and the Fed added more firepower to its monetary stimulus by proceeding with three rounds of bond purchases, known as quantitative easing, to sustain the recovery. Under Janet Yellen, Mr Powell’s predecessor, the Fed began to raise rates — although at 2.25-2.5 per cent, they are still less than half of their level in September 2007.

Last December, the Fed put the plans for further tightening on hold, in what was described as Mr Powell’s pivot towards a more “patient” approach to interest rate hikes, after equity markets dropped sharply. Yet as recently as March, Fed officials were still expecting to resume rate rises in 2020, according to the dot plots. 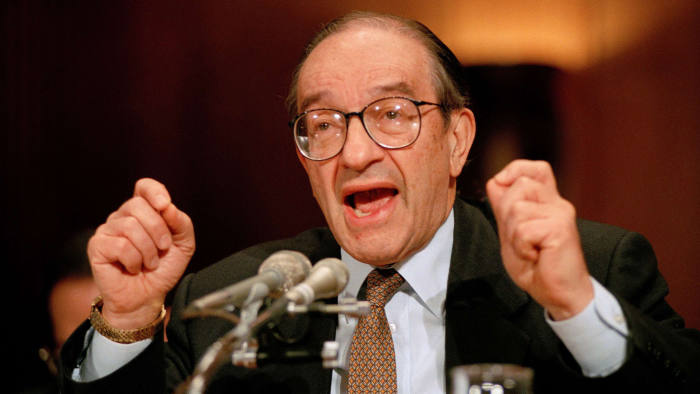 Alan Greenspan testifies before the Senate Finance Committee in 1995. The former Fed chair cut interest rates in 1995 and again in 1998, during the Asian financial crisis, to help sustain US expansion © AP

Fed officials are not, however, looking at the current situation through the lens of 2007 — which would spook markets by signalling a looming recession — but through the frame of the 1990s. Alan Greenspan, then chair, cut rates in two cycles, first in 1995 and then in 1998 during the Asian financial crisis, to help sustain the US expansion that took place under Bill Clinton. “In past episodes, in the 1990s, we did have insurance cuts by the Fed,” Richard Clarida, the Fed vice-chairman, told CNBC earlier this month. “That has been in the monetary policy toolkit in the past.”

The main factor that has soured the US outlook in recent months has been the escalation in trade tensions between the US and major trading partners. In early May, talks between Washington and Beijing to end their trade dispute unravelled, leading to escalating tariffs on billions of dollars’ worth of goods crossing the Pacific Ocean every day.

Meanwhile, the Trump administration has threatened to slap tariffs on Mexico for failing to curb immigration, and is still considering levies on auto imports from the EU and Japan.

“[Trade] is the most obvious and most important risk to the US economy and the world economy,” says Joseph Gagnon, a senior fellow at the Peterson Institute for International Economics in Washington. “What the Fed is wondering is . . . if business gets worried and they cut back on investment and spending because they fear it could get even worse.” 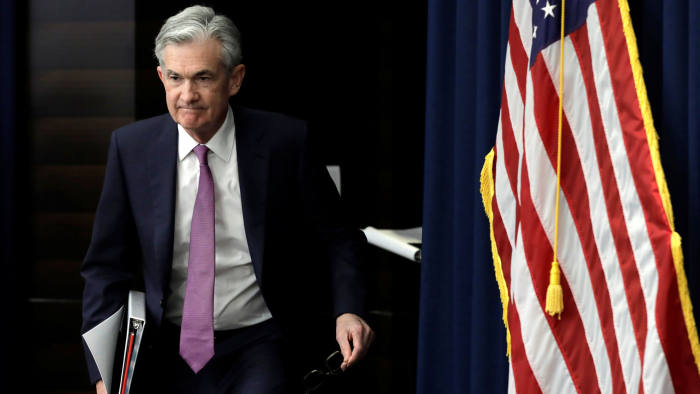 Jay Powell arrives at a news conference in May. The Fed chair was pointing to a possible reverse of course on rates © Reuters

But predicting the course of US trade policy — and its effects on the economy under such an impulsive president as Mr Trump — is exceedingly difficult.

Frederic Mishkin, a former Fed governor and a professor at Columbia University, says the Fed needs to be cautious about changing course because the politics are so unpredictable. “It may just be bluster and it may go away if we get a reasonable accommodation with the Chinese,” he says. “You don’t want to be in a situation where you start lowering rates and then have to raise them shortly thereafter.”

Wall Street is watching closely. Jamie Dimon, chief executive of JPMorgan Chase, this week said he hoped the Fed would make the “right decision” based on the data, adding that big cuts would be a bad sign. “If they are doing [a 50-75- basis point rate cut] that means that the real economy is getting worse, which is not good.”

Yet the White House continues to pile on the pressure for the earliest possible easing. “Far be it for me to suggest it would be great if the FOMC [Federal Open Market Committee] cut its target rate at the June meeting,” Larry Kudlow, director of the National Economic Council, said on Thursday.

The Fed would bristle at the notion that it could be influenced by Mr Trump’s haranguing. But one of its big challenges is that incoming economic data has not offered a crystal-clear case for a particular course of action. 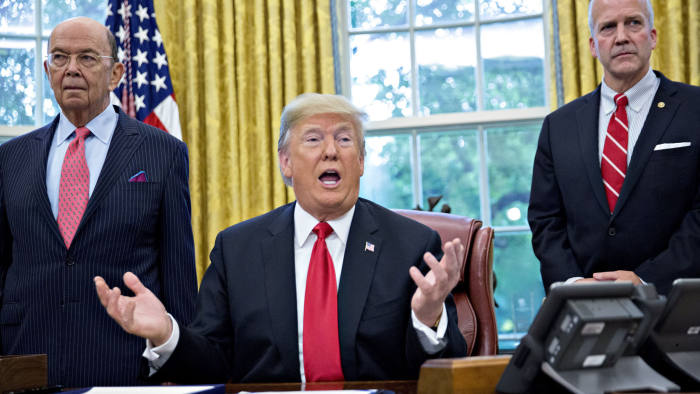 President Trump has made frequent attacks on the central bank, criticising it for raising interest rates ‘far too fast’ © Bloomberg

Growth in gross domestic product of 3.1 per cent in the first quarter has given way to expectations collected by the Atlanta Fed of 2.1 per cent growth in the second quarter, yet forecasters are not predicting that the US is sliding towards a recession. There has been some weakening in manufacturing and consumer sentiment indicators, while jobs figures showed a slowdown in hiring. But retail sales data released on Friday suggested that consumer spending remained solid.

One of the biggest factors that could tilt the Fed towards rate cuts is that inflation has remained subdued. The core Personal Consumption Expenditures index grew by 1.6 per cent on a year-on-year basis in April, well below the central bank’s 2 per cent target. While some Fed officials see stubbornly low inflation as a fundamental challenge that should be tackled head-on with rate cuts, others see it as a more transitory factor — and certainly not sufficient to justify monetary easing.

Yet some economists warn that Mr Powell cannot afford to be excessively patient either, and nipping any downturn in the bud is even more crucial for the Fed now because low post-crisis rates give it less space to ease monetary policy in the future.

“If [Mr Powell] wanted to argue that easing should come sooner, one of the arguments that he could make is that if you’re at 2.5 per cent on the Fed funds rate, you want to get ahead of the slowdown, you don’t wait for it to get here,” says Mr Wessel.

If Mr Trump and Xi Jinping, the Chinese president, emerge from the G20 summit in Japan this month with no deal on trade — or not even any signs of a new truce — that might just clinch it for Mr Powell.