Europe and Russia on Friday urged caution over the explosions on two oil tankers in the Gulf of Oman as Donald Trump accused Iran of attacking the vessels, further heightening tensions between Washington and Tehran.

Speaking the day after Mike Pompeo, the US secretary of state, pointed the finger at Iran for the attacks on Thursday, which triggered a jump in oil prices, the US president said there was no doubt Iran was the culprit. “Iran did do it and you know they did it,” he told Fox & Friends in a telephone interview.

Referring to a grainy video released by the Pentagon that the US claimed showed an Iranian military vessel recovering an unexploded limpet mine from one of the two tankers, Mr Trump said: “You saw the boat at night.”

However, Hassan Rouhani, the Iranian president, on Friday rejected the allegations and accused Washington of being a danger to the Middle East. “The US government has turned into a serious threat to the stability of the region and the world over the past two years through misusing its economic, financial and military capacities,” he said.

France’s foreign ministry warned that the incidents were “fuelling the already strong tensions in the area”, adding that it was appealing “to all the actors concerned . . . to act with restraint and towards de-escalation”.

Germany’s foreign minister Heiko Maas on Friday said the video provided by the US was not sufficient to prove that Iran was behind the attacks.

The Russian foreign ministry has warned against rushing to assign blame for the attacks, saying the US’s “Iranophobic” stance had “artificially” fuelled tension and urged all parties involved to show restraint.

Despite the more cautious assessments from other European capitals, UK foreign secretary Jeremy Hunt issued a statement on Friday evening backing the US position.

“Our own assessment leads us to conclude that responsibility for the attacks almost certainly lies with Iran,” Mr Hunt said. “These latest attacks build on a pattern of destabilising Iranian behaviour and pose a serious danger to the region.

“We call on Iran urgently to cease all forms of destabilising activity. The UK remains in close co-ordination with international partners to find diplomatic solutions to de-escalate tensions,” added Mr Hunt.

The UK statement also pointed the finger directly at the Iranian Revolutionary Guard corps. “No other state or non-state actor could plausibly have been responsible,” the statement from the Foreign Office said.

The insurer of the Front Altair, one of the affected vessels, said Iranian forces were likely to be behind the attacks, according to an internal report seen by the Financial Times. The tanker erupted into flames after being hit by three explosions at two-minute intervals on the starboard side of the vessel, prompting the crew to evacuate, it said.

The report issued by the Norwegian Shipowners’ Mutual War Risks Insurance Association, or DNK, said the attacks could have been intended as a message to the US and its allies that Iran did not need to block the Strait of Hormuz physically to hamper navigation in the region.

Svein Ringbakken, chief executive of the DNK, declined to comment on the confidential report. 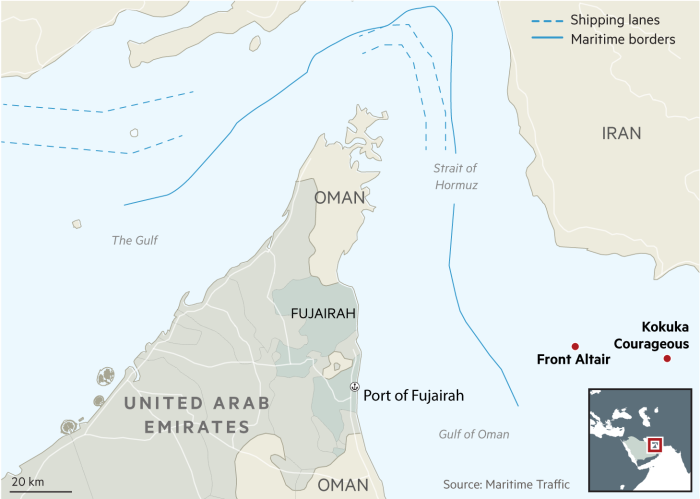 Mr Pompeo on Thursday said the US had made its determination based on intelligence, the weapons used in the attack and the sophistication of the attack. He described the attack as an “unacceptable” threat to international peace and a blatant assault on navigation.

The US alleged that the video showed Iranian forces returning to one of the vessels more than seven hours after the early-morning attacks, in an apparent bid to hide incriminating evidence. Details of what caused the damage to the tankers, whose crews were evacuated, were murky.

Some crew members of the Kokuka Courageous, the other tanker attacked, “witnessed a flying object”, according to Yutaka Katada, president of Kokuka Sangyo, the vessel’s operator.

“The crew told us something came flying at the ship, and they found a hole,” said Mr Katada. “Then some crew witnessed the second shot.” He added that there was no possibility that the ship, which was carrying 25,000 tonnes of methanol, was hit by a torpedo.

While oil prices rose as much as 4 per cent in the aftermath of the attacks, they have since pulled back. Brent crude, the international benchmark, was up 1.4 per cent yesterday at $62.13 a barrel.

The latest incidents came after four oil tankers, including two Saudi vessels, were sabotaged off the coast of the United Arab Emirates last month, which John Bolton, US national security adviser, blamed on Iran, and a Houthi drone targeted a Saudi oil pipeline.

Saudi Arabia and the UAE have welcomed the US tightening of sanctions on Iranian crude oil exports and Washington’s decision to heighten its military presence in the Gulf.

The attacks on international shipping have rekindled memories of the 1980s tanker war when the bloody Iran-Iraq war spilled over into the Gulf with years of escalating attacks on merchant shipping.

The US eventually intervened in 1987 by deploying naval vessels to escort tankers through the oil choke point of the Strait of Hormuz.

Additional reporting by David Sheppard and Seth O’Farrell in London

Timeline: rising tensions in the Gulf

John Bolton, US national security adviser, announces that the Trump administration is deploying an aircraft carrier strike group and bombers to the Middle East in response to troubling “indications and warnings” from Iran.

Four tankers, including two Saudi vessels, are hit by “sabotage” attacks in the Gulf of Oman, off the coast of Fujairah, one of seven emirates that make up the United Arab Emirates. There were no casualties or oil spills but the vessels were damaged. US officials said they suspected Iran. Tehran denied any involvement.

Two Saudi Arabian oil pumping stations along a pipeline to the Red Sea port of Yanbu are hit by drone attacks. Yemen’s Houthi rebels claim responsibility for the attacks. The US and Saudi Arabia accuse Iran of smuggling weapons to the Houthis.

Saudi Arabia launches air strikes on Yemen’s capital in retaliation against the Houthis.

Two oil tankers, the Norwegian-owned Front Altair and the Japanese-owned Kokuka Courageous, are attacked in the Gulf of Oman. US secretary of state Mike Pompeo points the finger at Tehran. Iran denies the accusations. The US military releases a video that it says shows Iran’s involvement.