Are markets somehow “broken”? That may sound shrill, but some analysts and investors fret that there are some weird sounds coming out from under the hood of the financial system, clanks and whirrs that should worry us all.

Fears over economic growth are spreading, and investors are pricing in the Federal Reserve cutting interest rates three times this year, beginning next month. And yet, various measures of market volatility are surprisingly subdued.

The Vix index, a popular gauge of Wall Street fear that measures the volatility implied by option prices, has nudged higher since May, and so has its equivalent for the US Treasury market, the Move index. But compared with the deteriorating backdrop they look remarkably low. Here they are charted against the Economic Policy Uncertainty Index, which measures divergences in forecasts and newspaper mentions of uncertainty. 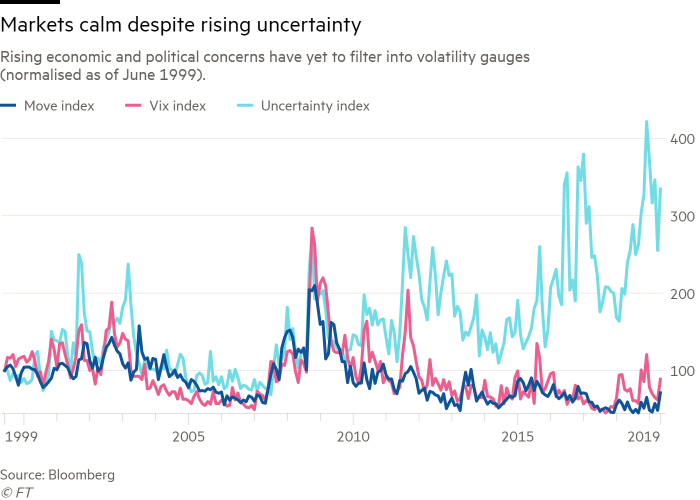 It is not just the vague sense of unease that is increasing. The global version of Citi’s Economic Surprise Index — which reflects how data comes in, compared with expectations — is locked in its longest run in negative territory on record. In other words, economic data has been disappointing for an unnervingly long stretch. 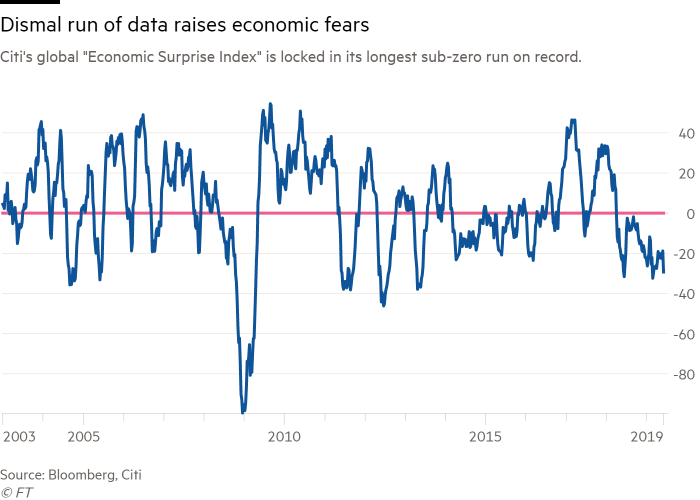 Perhaps most worryingly is that most of the US yield curve is “inverted”: that is, when long-term Treasury yields are lower than short-term ones. That has historically presaged economic downturns, and the New York Fed’s own curve-derived model indicates that there is almost a 30 per cent chance of a recession over the next 12 months. That has led some analysts to urge investors to gird themselves for turbulence ahead.

“With global growth falling since 2018, less scope for monetary and fiscal easing and lingering equity volatility, ‘buy the dip’ appears increasingly risky and instead it might be time to ‘sell any rip’ as drawdowns could become larger and last longer,” argues Christian Mueller-Glissmann, a Goldman Sachs strategist.

And yet Bank of America’s option-derived global market risk gauge — a kind of “super-Vix” that reflects the expected volatility of stocks, currencies, bonds and commodities — is relatively tranquil. 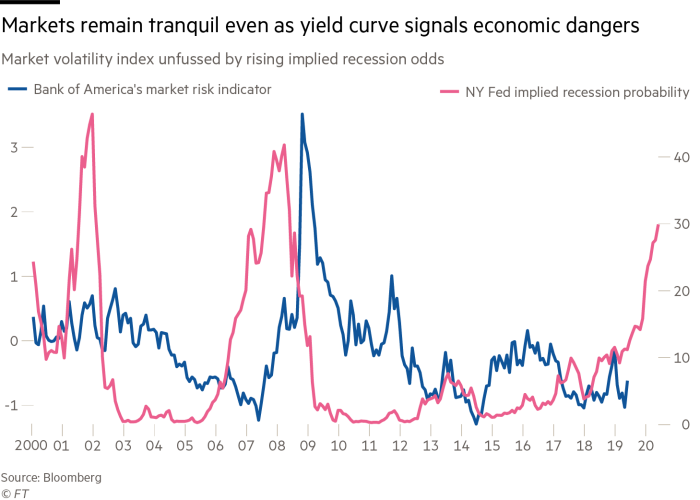 There also seems to be a divergence in views inside the bond market. While government bond yields are screaming that the global economy is in bad shape and could soon be in even deeper trouble, junk bonds, which should be acutely sensitive to any signs of economic trouble, have hit a new record high. Even trashy triple C-rated debt has returned over 8 per cent this year. 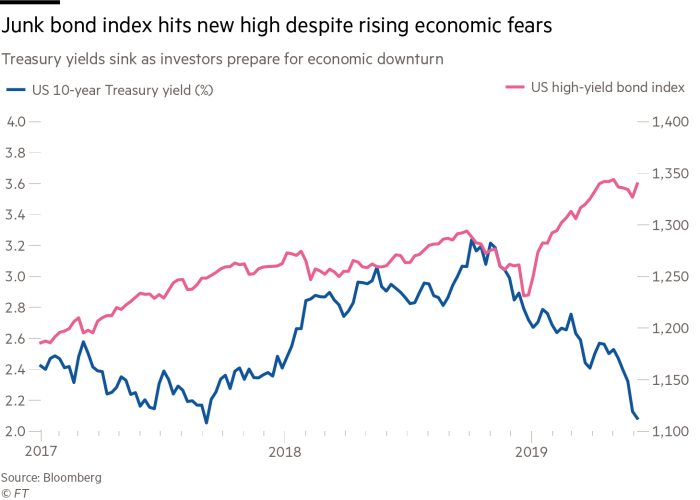 One could argue that government bonds, credit and equities are not really singing from different hymn sheets. Instead, they are all pricing in the likelihood of an economic slowdown that forces central banks, led by the Fed, to ease policy, forestalling a full recession and giving markets more of the monetary balm they have enjoyed since the crisis.

Yet Matt King, a Citi strategist, argues there is a more “sinister” explanation. Investor herding, structural changes and “a residual reluctance to bet against central banks” mean that markets are mispricing the underlying risks, he says, and are therefore vulnerable to a sudden, violent reassessment.

That could prove painful, as December’s market turbulence, exacerbated by poor liquidity, demonstrated. Liquidity can be defined as the ability to trade without moving prices too much. In that sense, many markets seem to have dried up in recent years.

There are various ways of trying to measure this, but one good proxy is the number of S&P 500 futures contracts that are quoted within 1 index point of its current level. The “E-Mini”, as it is nicknamed, is the most actively traded futures contract in the world, but the depth of this market has deteriorated sharply.

At one point in December liquidity was thinner than during the worst period of the financial crisis. Moreover, the recent recovery in E-Mini liquidity has been weak, despite calmer markets. 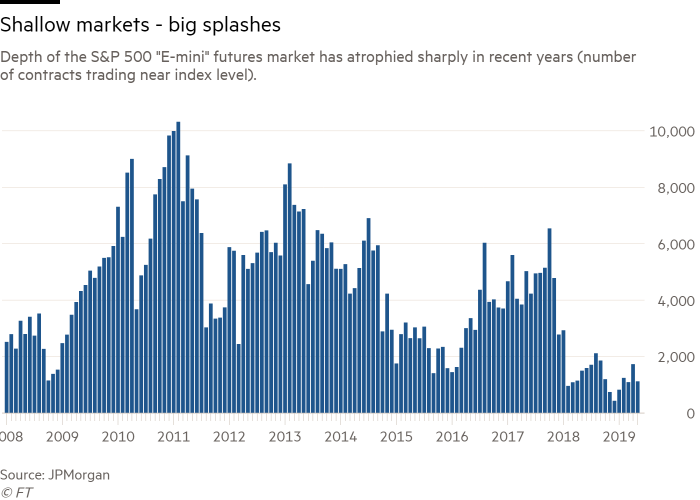 This is why investors surveyed by JPMorgan last month said that a “collapse in market liquidity” was their biggest fear, ahead of political risks like trade wars.

This in turn appears to be making the volatility itself more volatile. Markets are enjoying longer, calmer stretches, but then more frequent, violent shocks. The VVIX index, the implied volatility of the Vix volatility index, averaged a reading of about 87 in the decade through 2016, but since then it has averaged over 94.

If one defines a shock as a one-day drop that is five standard deviations bigger than the daily average movement over the past month, then there have been five such violent tumbles since 2016. We have to go back to the 1940s to find a three-year period with as many abrupt slides. 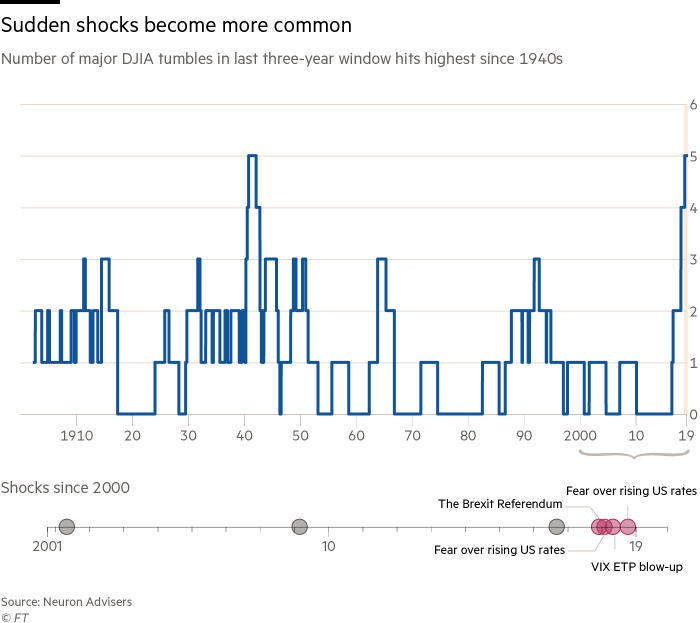 Mr King says volatility has become “bifurcated”. He argues market prices are moving less like a ball smoothly rolling over a billiard table, and more like a brick being tugged by a piece of elastic.

“To us, [the 2018 market turmoil] was not some strange anomaly in which investors overreacted to a Fed speech and then found seasonal illiquidity amplified the market moves when they tried to withdraw their money. It was a taste of how markets should have been pricing risk all along,” he says.